Quebec road results were generally better in 2021, except for cyclists and other vulnerable road users 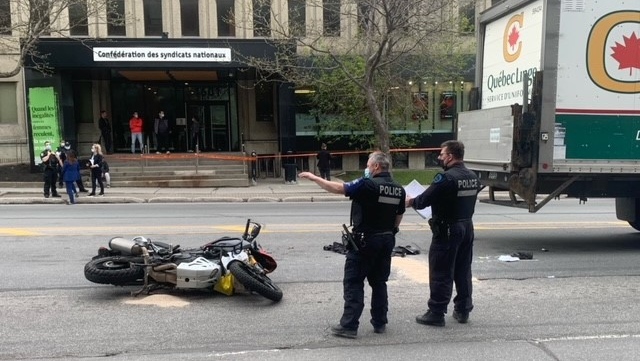 Last year's road toll in Quebec shows an 18 per cent decline in the number of people injured compared to the average for the previous five years, from 2016 to 2020.

However, the compilation released Tuesday by Quebec's automobile insurance board (Société de l'assurance automobile du Québec, SAAQ) shows 347 road deaths in 2021, up 0.7 per cent from the previous five-year average. However, 1,227 people were seriously injured, which is down 11 per cent from the same period last year.

The number of minor injuries decreased significantly from one period to the next, by 18.5 per cent.

The total of 137 vulnerable road users who died in road collisions was an increase of 5.2 per cent compared to the average from 2016 to 2020.

The SAAQ noted a 2.3 per cent increase in the number of vehicles on the road in 2021; it was 4.7 per cent for heavy vehicles, 10.7 per cent for motorcycles, and 11.1 per cent for mopeds, a combination that may explain the deterioration in the death toll among vulnerable users, according to the Crown corporation.

The number of cyclists involved in accidents was 1,459 last year, down 77 from the previous five years, but the 16 deaths among them represented an increase of 56.9 per cent. Meanwhile, the number of motorcyclists that crashed decreased by 4.8 per cent, but there were 67 fatalities in 2021, 27.4 per cent higher than the 2016-2020 average. Among moped riders, there were 703 crashes, up 29.5 per cent.

Transportation Minister François Bonnardel says he is very encouraged by the improvement in the 2021 road record, despite the upturn in travel. In his opinion, the investments and efforts made in road safety are working.

For his part, SAAQ president and CEO Denis Marsolais expressed his concern about deaths among vulnerable road users.

He said there will be continued efforts to prevent collisions and improve the road safety record.