MONTREAL -- As Quebec's premier urges citizens to practice a "sober holiday weekend," police continue to break up gatherings and the majority of Canadians in a survey said they feel it's unsafe to gather.

Premier Francois Legault posted a thought for the cities and regions his government imposed lockdown measures on in his weekly Facebook post, but added that the measures were necessary and will come for any city or region where COVID-19 variant numbers spike.

"I have a thought for the world of Quebec-Levis and Gatineau," he wrote. "I know the vast majority have been following the rules for a year. Obviously, there are the recalcitrants that cause outbreaks and damage that affect the whole community. But it's more than that."

He said that the COVID-19 variant explosions seen in several Quebec municipalities "can happen anywhere and very quickly" and that "if everyone limits their contacts for 10 days, it will go down."

"With vaccination, we are now able to live with more cases," Legault wrote. "But we can't afford an explosion of cases."

Legault said with younger and sicker patients seen in Europe and Ontario, the government needed to act quickly before Quebec's hospitals are pushed to capacity.

He also defended the decision not to take strict approaches in other cities such as Montreal.

"That's because there are areas where it is going well," he wrote. "And for me, every week a child can spend at school in Trois-Rivieres, every week an entrepreneur can serve clients at a restaurant in Sherbrooke, every week an artist can take the stage in Montreal to dazzle his public, these are all small wins for all of us."

A group of physicians in Quebec called for an immediate containment of the Greater Montreal area Friday.

He added that the government will monitor the situation in the coming days "from hour to hour" with the hopes of relaxing restrictions, but if an explosion of cases occurs for citizens to be prepared for the government "to step in real quick."

Legault may be preaching to the choir in his province, as a joint Leger and Association for Canadian Studies survey suggest that the majority of Canadians and Quebecers feel it is unsafe to gather over the weekend, and that seven-in-10 are okay with strict health precautions.

When asked if they felt safe attending gatherings, 56 per cent of the 2,200 surveyed said no.

In Quebec, the number was highest at 60 per cent, while Albertans felt much more comfortable gathering (37 per cent said they felt unsafe).

Over half (51 per cent) of those between 25 and 34 years old, however, said they felt safe gathering while those over 65 mostly felt unsafe (67 per cent).

Those 25 to 34 were also the most likely to respond that "yes, the threat and the need for health protection is measures is exaggerated" (32 per cent).

In total, however, 73 per cent (70 per cent male, 75 per cent female) did not think the need for protective measures were exaggerated.

POLICE WILL BE VISIBLE

The SQ said officers have already handed out around 40 fines in two locations - Shawinigan and Ste-Beatrix - for illegal gatherings.

Other police services, such as those of Quebec City, Trois-Rivieres and Chateaugay, have informed the populations they serve that their officers will be more present on the ground until Monday, particularly in parks and various targeted locations in residential neighbourhoods or elsewhere, in addition to carrying out roadside checks to ensure that curfews are respected.

The Quebec City police (SPVQ) reminds us that the objective is to ensure that the various measures decreed by the government are respected.

Montreal police (SPVM) will also be more visible over the weekend in public places and areas where gatherings are possible.

"They will be visible," said SPVM spokesperson Veronique Comtois. "It's really every police station that will be responsible for their area." 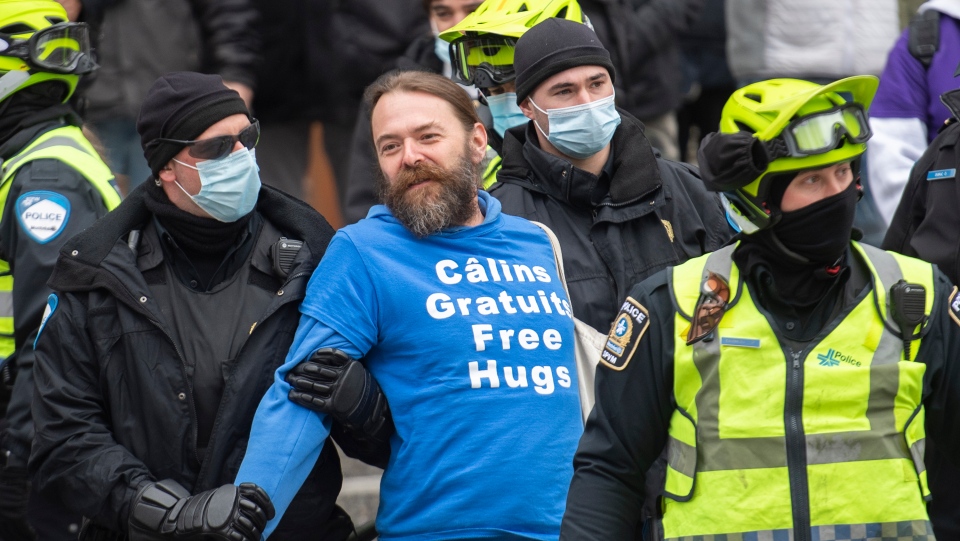 Police remove a man from a demonstration opposing the Quebec government's health and safety measures to curb the spread of COVID-19 in Montreal, Saturday, March 27, 2021, as the COVID-19 pandemic continues in Canada and around the world. THE CANADIAN PRESS/Graham Hughes