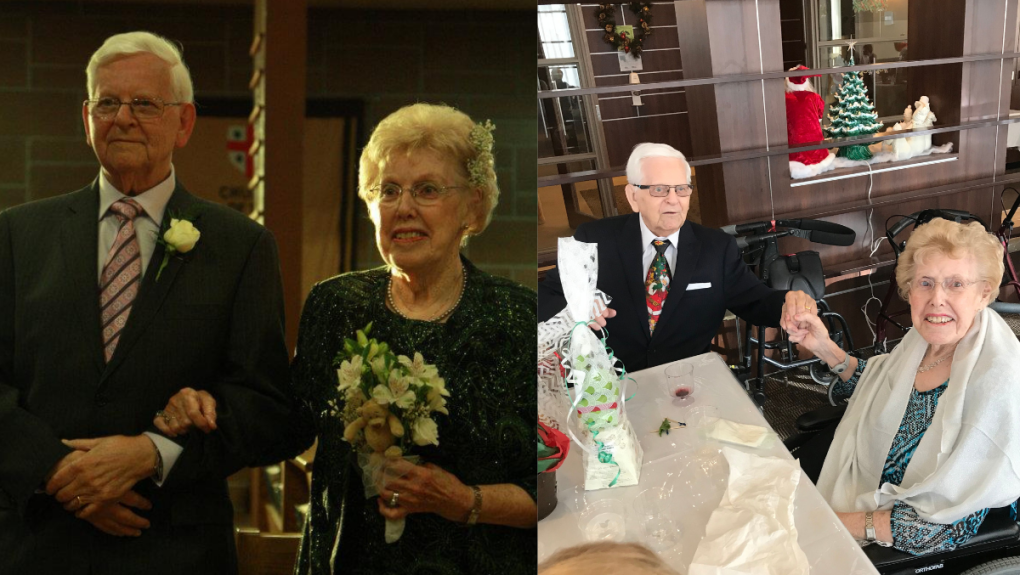 The two were friends for over four decades before falling in love and marrying at 84.

This year, however, Dec. 3 was marred in tragedy when Norman died after contracting COVID-19 leaving Betty a widow for a second time, lonely and isolated in her room at the West Island Manor, a seniors' home (CHSLD) which is currently in the novel coronavirus red zone.

"Last week my husband died and this is quite a shock," said Betty on Saturday from her room. "I didn't know he was that bad."

The home has the second highest COVID-19 infection rate at 57 per cent with 50 residents reported to have contracted the virus, Quebec reports.

As of Dec. 10, the province reported that 13 residents have died including Norman.

(Villa-Bonheur in The Eastern Townships is hardest hit home with a 68 per cent infection rate: 72 residents infected and 12 deaths).

After being spared during the first COVID-19 wave in the spring, things took a turn for the worse at the Pierrefonds home in Montreal's West Island.

"We were very pleased, but apparently somebody brought it in and by the time they found out it was ongoing, the majority of people had been infected," said Norman's son Bill. "They notified us on Saturday that Dad had tested positive."

Bill knew that on Nov. 30 (Monday) when the couple was confirmed COVID-19 positive, the outcome was likely grim, as his father was struggling with other health issues leading up to the positive test.

"It was extremely fast," said Bill. "We knew that if he ever caught it, he would not last."

"They were going to send him to an off-site to get more care, but it was too late," said Dorothy Wilson, Betty's daughter.

"All I said was just try to calm down and you'll be alright. He seemed to quiet down and was what I thought was asleep," said Betty.

After Betty woke up and was dressed by staff, she went to check on her husband.

"I went over to his bed, and I thought he was asleep," said Betty. "I felt his pulse and I couldn't feel anything. It was a very sad day for me."

The West Island's health and social services (OIM-CIUSSS) said teams are in place at the residence and doing everything possible to curb the spread of COVID-19 and care for its residents.

"We have excellent collaboration with the CHSLD teams who are entirely dedicated to stabilizing the situation," said spokesperson Hélène Bergeron-Gamache. "We are also in communication with the families of the residents. They are informed of the situation."

All residents who tested negative for the virus have been transferred out of the home.

The couple moved to the West Island Manor from the Chateau Royal Retirement Residence in Dollard-des-Ormeaux because they couldn't handle serious illnesses at the DDO residence.

The West Island Manor did not respond to a CTV News request for more information on the situation at the home.

"Things were going quite well, but Norman was just too ill, more ill than we realized I think," said Betty. "We just tried our best to keep it up and then Norman died."

Betty said her symptoms are mild, and she doesn't feel any different from when she did not have the disease.

"I don't feel ill or anything like that. I just know that I've got it," she said.

CRACKS APPARENT BEFORE THE PANDEMIC

Betty said she is not unhappy with the staff caring for her.

"They do the best they can," she said.

Betty singled out one worker named Winnie who comes to her room almost every day, and always cheers her up.

"She is an absolute gem," she said. "She always comes in to see if I'm alright. She has really been a wonderful person."

Bill and Dorothy agree that some staff goes the extra mile and are excellent, but have been frustrated with service since their parents first needed care.

Betty uses a wheelchair and requires assistance using the toilet. Dorothy said her mother has often called in tears after having to wait hours after pulling the assistance cord before receiving help.

"It could be six hours later to do a basic right to go to the bathroom," said Dorothy. "I don't understand. What are they doing?"

The couple said the issues at the facility were evident before the COVID-19 pandemic hit.

"It was a real source of agony for us," said Bill. "We were told many times, pre-pandemic, 'oh no. We're fully staffed."

"We had a whole list of complaints and it (problems) would still happen," said Dorothy.

Getting a hold of someone is very difficult, particularly on the weekends, they said.

"It was very frustrating," said Bill. "Communication has always been a problem, getting through to somebody was typically a problem."

Dorothy and Bill said they noticed facilities needing upgrades, resources lacking and a general problem with care when their parents' health began to deteriorating.

"We did notice there were cracks in the system as soon as my parents needed more care," said Dorothy.

Bill said staff often told the couple that the facility met provincial standards, which he felt was a cop out.

"We were basically ignorant of the overall condition of the CHSLDs," said Bill. "We did not know that there was a massive systemic problem there... Just because the Quebec government can't get it right doesn't mean they should try to do better."

A LOVE STORY LATE IN LIFE

Betty and Norman's love story is a unique one.

Betty is Dorothy's mother and Norman is Bill's father.

"We both lost our partners," said Betty. "We were always friends ever since Dorothy and Bill met."

"They were widow and widower," said Bill. "It is rather unique. They had known each other for 46 years... Dorothy's dad died first and then my mother died a number of years later and then Norman and Betty got together."

Betty is now in the room she shared with Norman unable to leave, and also unable to have contact with others unless they are wearing full protective equipment.

This week, Betty watched as staff removed her husband's clothes and other personal items.

"That has been very hard to watch all his clothes going," said Betty, who looks across the room at her husband's computer and wheelchair which remain.

"It's just a very lonely time for me because we're absolutely tied into our rooms," she said.

Bill and Dorothy call Betty every day to allow her to talk and grieve.

Norman was cremated and Bill said the family is planning a memorial for him as soon as they can.

Betty turns 95 Jan. 1 and likes to watch the news, and play games on her iPad.

She laughs when she talks about watching the political drama south of the border as President Donald Trump's term in office ends.

"Thank goodness for television is all I can say," said Betty with a laugh. "There isn't much else I can do because I'm not allowed out of my room."