Young people in Quebec have altruistic dreams for the future, says report 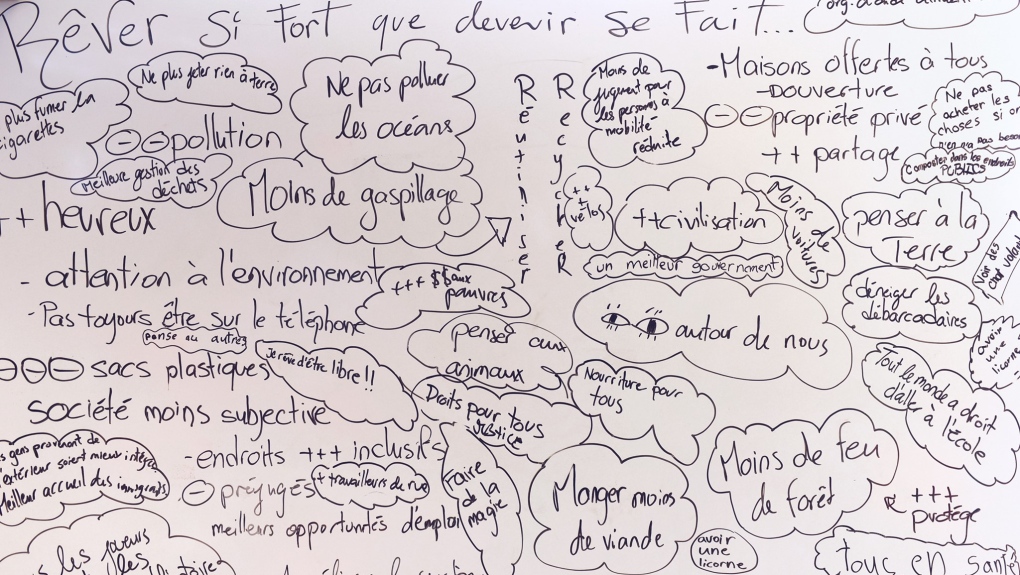 MONTREAL -- What do young people dream about?

It is the question that the Institut du Nouveau Monde asked 20 years after the start of the 21st century.

"The process was designed to reveal the hopes of the population, to reveal the aspirations that young people have for their future," said Institut du Nouveau Monde director Julie Caron-Malenfant. "We have the idea that to build the future we want tomorrow, we need to be able to have a clear vision from today to get to work."

According to the official Rever pour creer (Dream to Create) report, the question is not easy to answer.

"The dreams collected are just as diverse as the youth of Quebec and their ideas," said the report's authors.

Despite the diversity, a certain trend has emerged around the importance of the environment, the quest for improving society, social inclusion, solidarity and quality human relations.

"What came out and which at the same time gave us pleasure to discover is that dreams are very altruistic," said Caron-Malenfant. "They are very focused on the community, society, the collective."

THEN CAME THE PANDEMIC

When the investigation was launched at the end of February, the organizers were hopeful of "immense success," but by Caron-Malenfant's own admission, the pandemic came and "cut their wings a little."

They had to give up the idea of ​​going to present workshops directly in schools and their efforts turned to the internet.

"Necessarily, it could not have had the influence that we would have liked," said Caron-Malenfant. "We managed to collect several hundred dreams."

Five hundred, to be more precise.

People of all ages were invited to share their dreams for the year 2040, but 40 per cent of the contributions collected came from young people aged 10 to 14 and around 30 per cent came from adolescents aged 15 to 19.

According to Caron-Malenfant, it is difficult to say beyond any doubt that the COVID-19 pandemic has had an influence on the dreams of young people.

"The young people talked about health, love and caring, taking care of our elders. All of this could have emerged in a non-pandemic context, but perhaps it made the need to be united, supportive and benevolent towards anyone even more evident," she said.