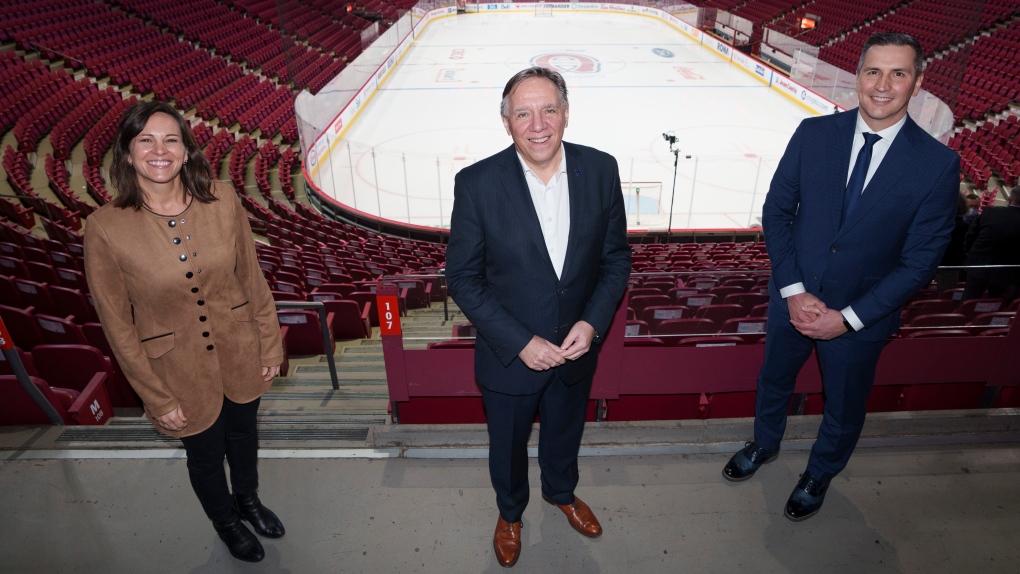 A new $35-million arena, including two rinks, dressing rooms, bleachers, service areas and parking, will be built in Magog, in Quebec's Eastern Townships.

Premier Francois Legault was on hand Friday morning to make the announcement along with Quebec's minister responsible for sports, Isabelle Charest.

Canadian Minister of Sports Pascale St-Onge was also onhand to announce the project that will be made possible thanks to a financial contribution of $9.1 million from both the provincial and federal governments.

Quebec was unable to follow up on Magog's request for funding last year.

Legault defended himself against accusations that he suddenly released the money in the run-up to the October election by explaining that last year, the money from the Programme d'aide financière aux infrastructures récréatives et sportives (PAFIRS) was fully distributed and proved insufficient in the face of numerous requests.

"That's why this year, we decided to put a new amount in the PAFIRS to be able to accept more projects," he said. "If we are elected -- I'm not taking anything for granted -- there will probably be another program next year because there is still a lot of work to be done for sports infrastructures in Quebec."

The City of Magog and the Memphremagog RCM will provide $9.5 million, while the remaining amount will be borrowed and then repaid once the arena is able to collect fees for the rental of its facilities.

Legault said construction is scheduled to begin in early 2023, with the arena able to welcome its first skaters for the 2024-2025 winter season.

The announcement came a day after the committee formed to evaluate the development of hockey in Quebec presented its report.

One of the group's recommendations, chaired by former NHL goaltender turned analyst Marc Denis, was to provide Quebec with appropriate infrastructure for hockey development.

-- This report by The Canadian Press was first published in French on May 6, 2022.

NEW | 'What were they waiting for?' Woman inside Saanich bank amid shootout describes 'calm' gunmen

Canada has signed an agreement to upgrade the NATO battlegroup it leads in Latvia to a brigade, a move that signals a commitment to the military alliance even as the federal Liberals resist calls to boost defence spending to two per cent of GDP.

A decorated OPP officer became part of the problem of the GTA’s troubled tow truck industry when he played favourites and sent more than half a million dollars in tows to a tow truck company also featured in a reality TV show, according to a Superior Court justice.