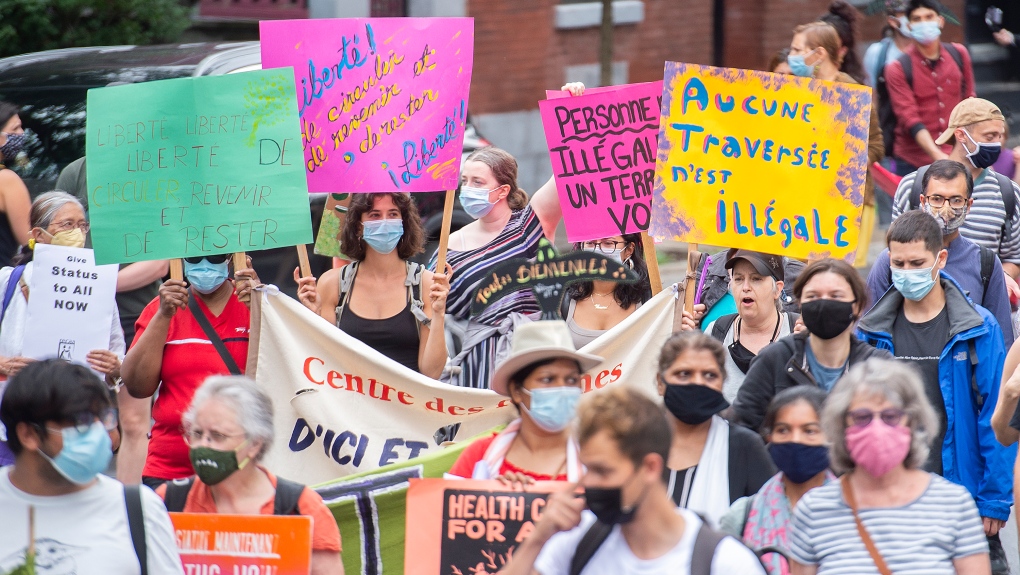 People take part in a 'Status for All' demonstration in Montreal, Sunday, July 18, 2021. THE CANADIAN PRESS/Graham Hughes
MONTREAL -

Several dozen people demonstrated Sunday morning in downtown Montreal to demand that the federal government provide a full and ongoing regularization program for refugees and migrants who they say are being "abandoned" by the immigration system.

The event marked the launch of a week of actions in Montreal and Ottawa, led by Solidarity Across Borders, to get better treatment for thousands of undocumented migrants.

Ottawa launched a regularization program last year for asylum seekers who worked in the health sector during the pandemic.

Solidarity Across Borders argues that this program, which is already full in terms of applications, excludes the majority of migrants, even those considered essential workers.

"We want full regularization for everyone, without exception, because everyone is essential, whether it's people who have worked in the health sector or people in grocery stores, butcher shops, or recycling collection," said Mohammed Barry, a representative of Guineans United for Status, who obtained permanent residency last year after eight years of "struggle".

No borders no prisons
stop the deportations#statusforall#solidaritywithJatinder and so many deported pic.twitter.com/NWtVlCG69u

"They have worked three times as hard, but they are paid less," he said.

Solidarity Across Borders says many struggle to pay rent and grocery bills, and others are forced to accept "dangerous and low-paying jobs" adding that during the pandemic, "undocumented migrants have endured enormous difficulties."

"Because of our situation, we have no access to health care, social assistance or legal work. That's the most important thing for a human being here, isn't it?" said spokesperson Samira Jasmin, who has been trying to regularize her situation since she arrived from Algeria eight years ago.

This Sunday, activists and undocumented migrants from Quebec plan to gather in front of Prime Minister Justin Trudeau's office in Ottawa to present a symbolic humanitarian request for all people with precarious status in the country.

The Migrant Rights Network (MRN) recently revealed that the rate of rejections of applications for permanent residence in Canada on humanitarian grounds has doubled since 2019.

"For non-status people, the only way out is the humanitarian application," said Jasmin.

No one must be left behind. Unite with us. Take action with starting July 18 as we go to Ottawa to call for #StatusforAll: https://t.co/wCUNsYJyKT

"It also expresses the desperation of these people because they are looking for all legal means to have a normal life," added Adboul Kan of Solidarity Across Borders.

The MRN found that 70 per cent of applications were rejected from January to March 2021, compared to 35 per cent in 2019.

-- this report was first published by The Canadian Press in French on July 18, 2021.

The Canadian men’s national team returns to the FIFA World Cup pitch on Sunday to face Croatia, where they must pick up at least one point or risk elimination. CTVNews.ca will follow the match live.

Canada must secure at least one point against Croatia to stay alive in the tournament and four-time champion Germany looks to rebound against Spain. Earlier, Morocco beat Belgium and Costa Rica defeated Japan.

Protesters pushed to the brink by China's strict COVID-19 measures in Shanghai called for the removal of the country's all-powerful leader and clashed with police Sunday as crowds took to the streets in several cities in an astounding challenge to the government.

Airbnb has a plan to fix cleaning fees

Pretty much everyone hates Airbnb cleaning fees -- those pesky charges tacked on to your vacation rental bill that supposedly cover the costs to get the place ready for the next visitors. Travelers don't like the expense, and hosts don't like charging them, either.