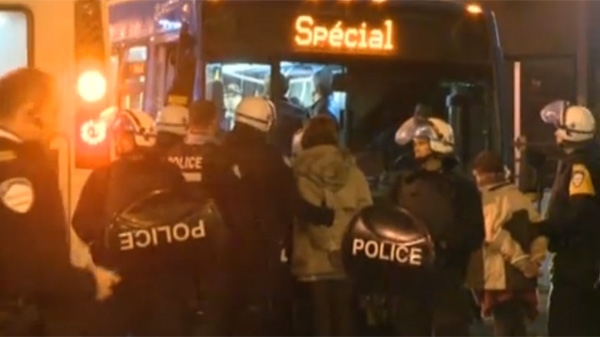 MONTREAL - Two people were arrested toward the end of a Thursday night student protest.

The march was declared illegal less than an hour after it started when projectiles were thrown at nearby officers.

Despite being declared illegal at 9:01 p.m. the largely peaceful protest continued marching west from its starting point at Berri-UQAM metro. With two verbals warnings, many students and supporters seemed puzzled that police were attempting to disperse the march.

Chanting "We haven't done anything," the students were followed calmly by riot police as they walked past McGill University. While a second group briefly broke off the main protest, the two groups re-merged near Concordia University and continued walking on Sherbrooke St. west of Guy St.

Turning east on Rene-Levesque Blvd. at Atwater St., the protest began to move back towards where it started.

Unlike previous demonstrations, most people at the Thursday protest didn't cover their faces.

With less than 2,000 students in attendance, the crowd on Thursday was small by recent standards due to cool rain. CLASSE has promised to organize a protest every night until the bitter stalemate between the Quebec government and the province's student federations comes to an end.

The protest came a day after over 6,000 students took to the city's core in a violent clash that saw 85 arrests and injured three police officers. Wednesday's protest was organized by students angry at the exclusion of CLASSE, the province's more militant student federation, from the government's negotiating table only hours earlier.

"We are concerned that the government is using a divide-and-conquer strategy to end this strike," said Leo Bureau-Blouin, the president of FECQ, earlier on Thursday.

Education Minister Line Beauchamp has rejected further talks with students, citing their demand that all three of the province's student federations be invited to the negotiating table. The minister's rejection came on the same day that Montreal's mayor called for a negotiated settlement.

The demonstrations, which appear to have spread from students to include a range of other activist groups, follow an abrupt halt to negotiations over proposed tuition hikes in the province.

There have been 160 protests in the 11 weeks since students walked out of classes, and Wednesday's destruction marked an upswing in hostilities.

The story has made headlines internationally. CNN showed dramatic images of the riot on U.S. national television.

"Our reputation as a city is being tarnished by these protests," said Mayor Gerald Tremblay, calling for calm.

This story is developing.