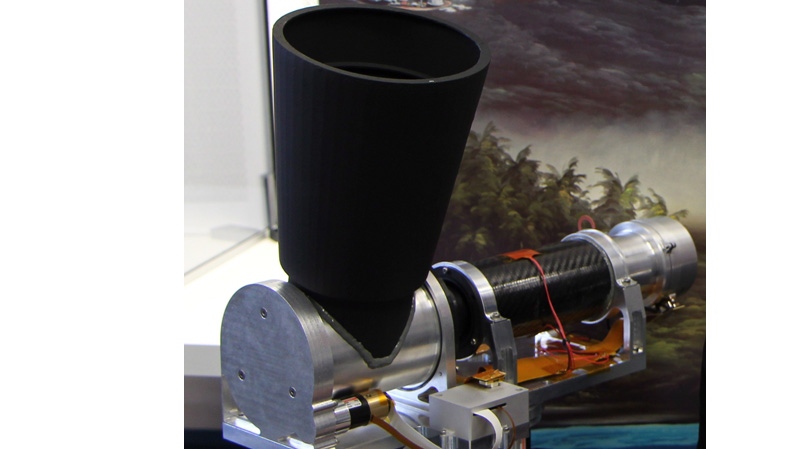 The ILO-X lunar telescope which was designed and built for his International Lunar Observatory Association by Silicon-Valley based Moon Express Inc. is shown in this undated handout photo. The privately-funded telescope that is set to launch to the moon in 2015 will allow the public to go on the Internet and view the Earth from the lunar surface. THE CANADIAN PRESS/HO-Moon Express

MONTREAL -- A telescope that is set to launch to the moon in 2015 will allow the public to go on the Internet and view the Earth from the lunar surface.

"It's citizen science on the moon and it's really a new model of public participation," Moon Express CEO Bob Richards told The Canadian Press on Tuesday.

"This will be a small, but very high-performance telescope on the moon that the public and scientists or professionals and amateurs alike will have access to over the Internet."

The flight-test hardware was officially unveiled Tuesday in Vancouver by the Hawaii-based International Lunar Observatory Association.

The association is led by Steve Durst, an American businessman and educator.

"Our customer (Durst) had this dream for a long time of a lunar telescope and we've been working on it for two years now," Richards said from his office in the San Francisco Bay area.

"So I think that's a real example of how the private commercial space sector can benefit science and education.

"It doesn't have to be big government programs and big science doing that."

Richards also said the telescope was tested in December 2011 from the summit of the Mauna Kea volcano in Hawaii.

"We put it on top of the Mauna Kea, pretended it was on the moon and had scientists and individuals access it through Internet software that we developed," he said.

The Canadian-born Richards said the shoebox-sized telescope will allow people to see images they've never seen before because they will be taken from the lunar surface.

"Depending on where you are on the Earth you may be seeing the moon up in the sky, taking a picture of you, which would be kind of a heady thing to think of," he added.

Richards pointed out that people on Earth will even be able to manoeuvre the telescope by remote control, giving them out-of-this-world access to galaxies, stars and planets.

"The other thing that you'll be able to do is turn the telescope down to the lunar landscape and take pictures of the landscape that's around the (Moon Express) lander."

Moon Express is also competing for the Google Lunar X Prize, which offers $US20 million to the first privately funded team to land a robot on the moon. The runner-up gets $US5 million.

The small rover would have to travel more than 500 metres and transmit back HD images and video.

"We want to win the Google Lunar X prize so that is somewhat driving our schedule," Richards said, adding his customers want Moon Express to land on the moon before the end of 2015.

Richards noted that the ILO-X is a precursor to a more permanent lunar telescope to be installed on the moon's south pole in the future.