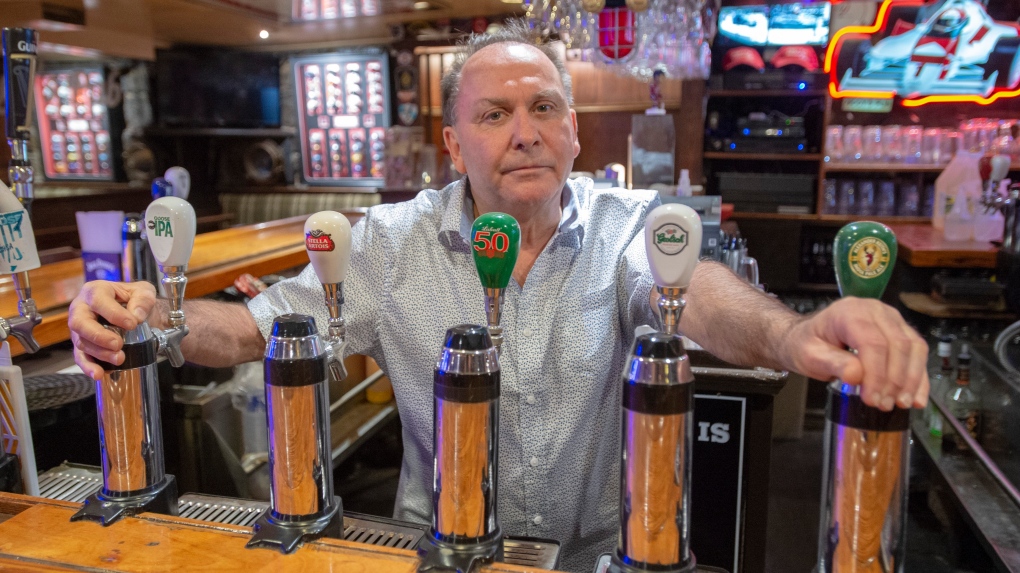 Ziggy Eichenbaum, owner of Ziggy's Pub, is seen in his bar Friday, June 12, 2020 in Montreal. As Quebec allows the reopening of restaurants that serve alcohol in the next two weeks bars without food are to remain closed. THE CANADIAN PRESS/Ryan Remiorz

MONTREAL -- This is usually one of Ziggy Eichenbaum's biggest-earning weekends of the year, when his pub is packed with tourists and partiers soaking up the atmosphere surrounding the Montreal Grand Prix.

But instead of hosting a giant street festival, Crescent Street is dead quiet and bars like Eichenbaum's remain in limbo in the absence of clear directives on when they can open following the COVID-19 pandemic. As a result, some are mulling defying the government as a protest tactic.

The province has announced that restaurants outside the Montreal area can open on June 15, with those in the metropolis following a week later on June 22.

But the measure does not apply to bars like Ziggy's Pub, which cannot open because it doesn't have a food preparation permit from the Quebec government, even though he says many establishments similar to his can open.

"We're not a club, we're not a disco where people stand up and drink," Eichenbaum said. The only difference between his bar and those that can open is, "they have a kitchen and I don't," he said in a phone interview.

In the face of what they see as unequal treatment, some of the bars are taking a defiant stand. Eichenbaum and Steve Siozios, who owns Stogies Cigar Lounge and London Pub, are two of those who say they plan to open their doors on July 1, even if they face penalties.

"It's either we open, face the fine or we permanently close," said Siozios, who is also head of the local merchants' association. "We have nothing to lose, do we?"

To add to the irritation, the Quebec government has loosened restrictions by allowing restaurants to sell alcohol without a meal, pushing them onto the bar owners' perceived turf.

Quebec Premier Francois Legault and the province's director of public health have argued that drinking in bars takes place in a "different context" than restaurants.

"There is a difference between bars, where everyone is standing closer to each other, and restaurants, where the number of people is limited at each table and at a distance," Legault said Monday.

But Siozios points out that the rules, as written, would allow some nightclubs and strip clubs to open, because they have kitchens, while sit-down pubs with tables, like his and Eichenbaum's, are left out.

The bar owners who spoke to The Canadian Press all said it will be difficult to stay in business, even if they're allowed to reopen.

Andrew Whibley, the owner of cocktail bars Cloakroom and Stillife, said most bars have slim profit margins at the best of times and are unlikely to be financially viable at half their capacity or less.

"To be honest, with the social distancing regulations they've put in place, you're not going to be able to succeed," he said.

Eichenbaum said St. Patrick's Day and Grand Prix week, both of which were scrapped this year because of the pandemic, normally account for 50 per cent of his yearly revenues. The NHL draft, which was scheduled to take place in Montreal, has also been cancelled, and he will miss out on returning students this fall, since most classes are moving online.

But while reopening wouldn't solve all their problems, the owners say it's a start. Siozios says staying closed longer will likely mean losing his long-time employees, who have become "like family."

"A bar isn't the chairs, it's not the beer, it's the people you've developed relationships with over the years," he said.

All three bar owners believe that without more help, half or more of the city's bars are at risk of closure. However, they don't all agree on what measures are needed.

Whibley is adamant that bars need to be allowed to sell alcohol in take-out formats, which could be combined with pre-packaged mixers to allow patrons to make top-quality cocktails at home and create a new revenue stream for bars.

Siozios thinks pedestrianized streets and expanded patios could be a solution, but Eichenbaum thinks the current city administration has already removing too much parking.

What's clear to all of them is that the industry will need to be reimagined in a world where social distancing has become the norm.

"Bars are about the atmosphere, the camaraderie, the socializing part," Siozios said. "This has killed the social aspect of our society. We have to somehow change how that works."

He believes bar owners will be up to the challenge. But first they have to open, see what works and come up with solutions along with the local government.

"We need to find that magic formula, and I think bar owners are very good at that," he said.

This report by The Canadian Press was first published June 14, 2020