'Some jobs will not come back': Quebec says it plans to help workers transition 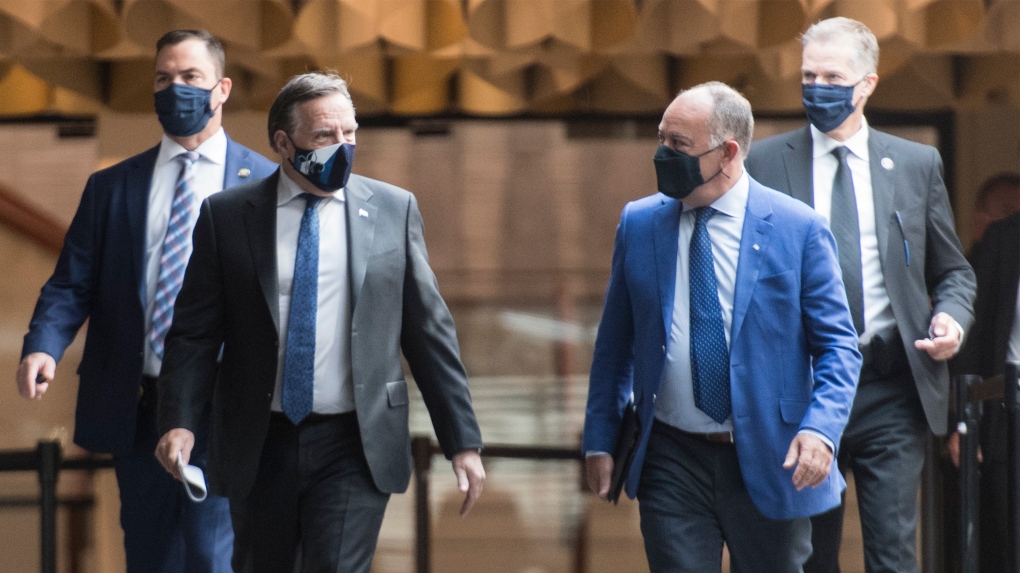 Quebec Premier Francois Legault, left, and health minister Christian Dube arrive for a news conference in Montreal, Monday, July 13, 2020, as the COVID-19 pandemic continues in Canada and around the world. (THE CANADIAN PRESS/Graham Hughes)

MONTREAL -- Unemployment levels in Quebec are still high amid the COVID-19 pandemic and the Legault government is looking at ways it can support workers who choose to venture towards new sectors.

"We are actually in the process of putting in place this entire requalification process, how we can financially help people who go back to school for a while," Premier Francois Legault said at a press conference on Friday.

He said certain sectors -- like retail, for example -- have been hard hit by the pandemic and will likely never fully recover.

"The pandemic is bringing about structural changes," he said. "There are industries where it will be harder; where some jobs will not be able to come back."

Quebec's economy is also not expected to recover for years, Legault said.

"Economists predict that the slowdown in international trade will continue for months, years," he said. "So that means, concretely, that our companies will not be able to count as much on the growth of exports, but it opens up an important opportunity to replace part of our imports with products made in Quebec."

Investissement Quebec is in the process of identifying sectors that could locally produce more items the province typically imports.

"But here too, I need Quebecers," Legault said. "You have to try to have the reflex to buy from Quebec, so to look at whether it is made in Quebec; is it made in Quebec? To favour products that are made in Quebec."

Legault said he's looking at prioritizing Quebec companies for the province's green projects when it comes to its trains, electric cars, trucks and buses.

"We are trying," he said. "We are currently working very hard to ensure that as many of these products as possible are made in Quebec."

In the coming weeks, a new bill will be tabled to replace Bill 61, and Legault hopes it will receive less criticism than the first so the government can accelerate several of its infrastructure projects.