Say Your Prayers as you cross the Champlain Bridge 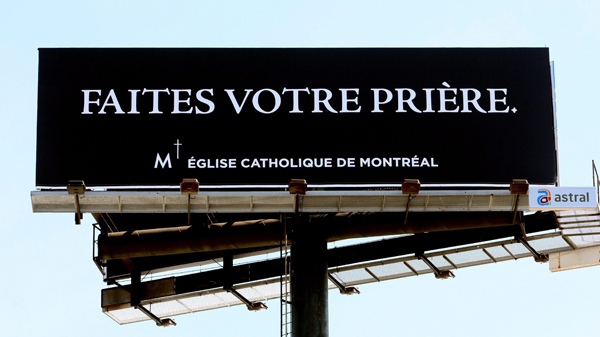 MONTREAL - The Roman Catholic Church is sending a message to motorists as they approach the city's crumbling Champlain Bridge: Say Your Prayers.

The archdiocese of Montreal hopes the words -- displayed on a highway billboard -- will draw attention to the church and encourage people to fill collection plates over Easter.

But the archdiocese is also voicing its political views on the future of one of Canada's busiest bridges, which is a hot federal election issue in the region.

"For sure we're associating with those who are asking for a safe structure," archdiocese spokeswoman Lucie Martineau said Tuesday.

"But we're not going to delve any deeper into this issue. It's really just to associate with them in a humorous way."

She insists its ominous message from above Highway 15 is all in good fun.

"It's simply a wink to people to remember that it's the beginning of the Holy Week," Martineau said of the billboard, which was unveiled Monday.

"We always have memorable advertisements and 'Say Your Prayers' is truly our domain."

The French phrase Faites Votre Priere (or Say Your Prayers) is featured on the black billboard in bold, white letters. Under the message, in a smaller font, are the French words for Catholic Church of Montreal.

It casts its shadow on a highway leading to the Champlain, which forms a major link above the St. Lawrence River between the island of Montreal and the city's south shore suburbs.

The state of the 49-year-old bridge, a federal responsibility, has become a big topic ever since media reports quoted two expert reports as saying the span is so fragile it could collapse.

Political parties have pounced on the issue.

The Conservatives have since pledged $158 million for urgent repairs to the Champlain, while the Liberals have promised to replace it in 10 years, if elected.

Mayors of cities at both sides of the bridge are calling on the next federal government to build a new one.

The Bloc Quebecois, which won tight races in 2008 over the Liberals in the ridings at each end of the bridge, is echoing that demand.

But Premier Jean Charest says the bridge, which sees 57 million vehicles cross over it annually, can go another 10 years before tough decisions need to be made.

"A sudden or imminent collapse is unthinkable," said a recent statement by the federal body that oversees the Champlain.

Still, memories of the deadly 2006 overpass collapse in Laval are fresh in the minds of many Quebecers.

Five people were crushed to death in their vehicles, and six others were injured, after a 20-metre section of the three-lane overpass dropped onto the highway below.

The archdiocese says it has no problem running the advertisement because transportation officials have deemed the bridge safe.

"Honestly, we didn't think that it could be a morbid ad since at this moment, authorities are assuring us that the bridge is completely safe," Martineau said.

The advertising agency that pitched the idea says the archdiocese loved it.

"This is an agency that sort of looks for opportunities for our clients, you know stuff that will create a buzz -- you know, an election, a hockey game, a bridge that could fall down," said Ron Caplan, a senior writer for Bos, the company that has handled the archdiocese's annual fundraising ads for 23 years.

"What we've done for them over the years is try and take them from talking very 'churchy' language to communicating with people in a much more modern way."

Caplan said the ad shows people the Catholic Church cares about issues other than religion.

"I doubt anybody's going to see the sign, slam on their brakes and turn around," he said.

The archdiocese insists it didn't turn up the shock value of its advertising because its pews are emptying out.

Martineau estimates that Sunday church services in the archdiocese attract around 250,000 parishioners, a number she maintains has changed little over the last decade.