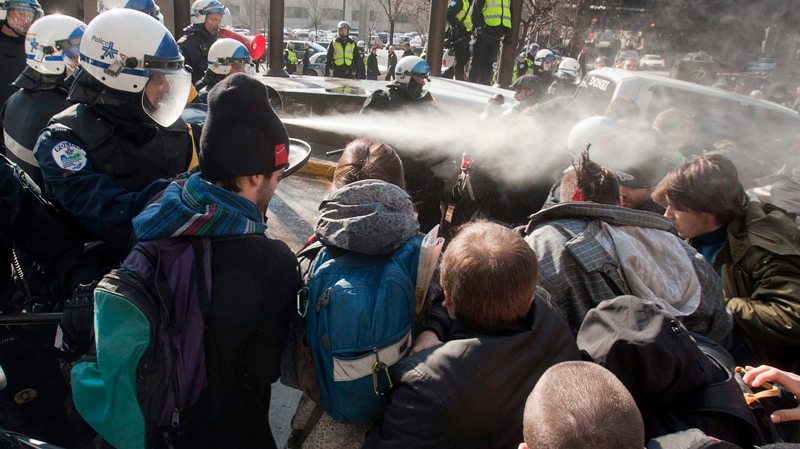 Police use pepper spray to disperse a crowd blocking the Delta hotel during a demonstration against higher tuition fees Thursday, February 16, 2012 in Montreal.THE CANADIAN PRESS/Ryan Remiorz

MONTREAL - If Quebec gets its way Quebec CEGEP teachers and university professors will still teach, even if students boycott classes as part of a mass student strike.

The office of the Deputy Minister of Education has sent a letter to the heads of universities and CEGEPs, reminding them of the rights and duties of such institutions and suggested that teachers continue to teach regardless of the student strike against rising tuition fees.

Leo Bureau-Blouin of the Quebec Federation of College Students (FECQ), said that requiring CEGEP and university professors to cross picket lines will only make things worse and will only sour the current good relations the two sides enjoy.

Jean Trudelle, president of the National Teachers Federation of Quebec (FNEEQ), said he was outraged by the order.

In an interview with Montreal newspaper La Presse, he accused the Department of Education of trying to undermine the student movement.

Trudelle said that the Education Ministry is trying to get school brass to force the professors to teach to classes that might be one-third or one-quarter full.

He recommends that the professors respect the picket lines and any classes missed be made up for in added weeks at the end of the strike, as was done in 2005.

The CSQ teachers union meanwhile said that they have told their members to not attempt to teach if they feel their safety is at risk.