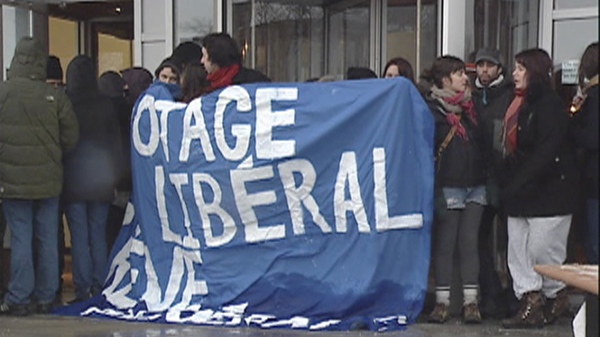 Dozens of university students staged a protest outside 600 Fullum St., the Montreal offices for the Ministry of Education (Jan. 27, 2012)

MONTREAL - University and CEGEP students opposed to tuition fee hikes protested Friday morning outside the Montreal offices of the Ministry of Education.

About 100 student protesters created a human barricade outside the Montreal offices of the Education Department.

They said they would stay there until the Charest government dropped plans to increase tuition fees.

"We'll be blocking the outside of the building to demonstrate to the government of Jean Charest that for as long as he plans to be blocking access to higher education, we'll be blocking things in Quebec,'' said Gabriel Nadeau-Dubois, spokesman for a student protest group.

Police officers were observing the scene, but there were no clashes between police and students, as happened at several protests last year.

The students moved on at around 10 a.m., leaving the building at 600 Fullum St. and marching downtown.

The protest was organized by the Association for Solidarity Student Union (ASSE).

Some members are so opposed to the tuition fee hikes, which will see the cost of university rise by $325 per year for the next five years, that they are calling for a general strike.

Quebec currently has the lowest university tuition fees in the country, and even after the tuition hikes will have fees lower than the average.

In-province students pay an average of $2,168 per year. The planned increases would bring Quebec's undergrad fees to $3,793, far less than the national average of $5,138.