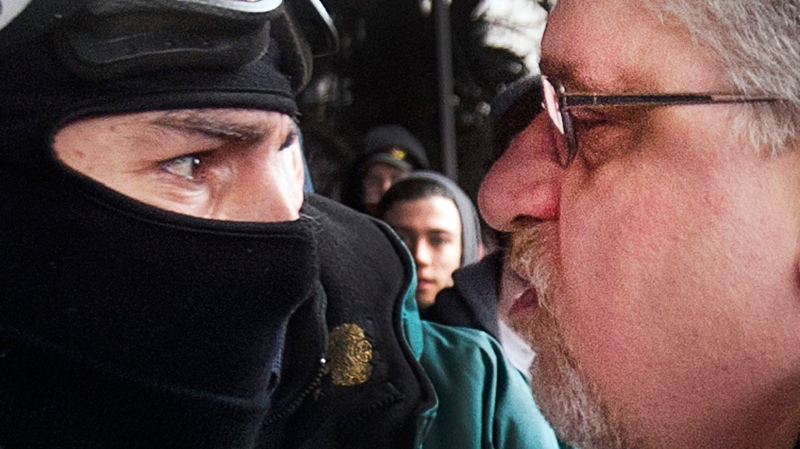 A protester (left) stares down a man trying to get into a hotel that was blockaded during a demonstration against higher tuition fees Thursday, February 16, 2012 in Montreal.THE CANADIAN PRESS/Ryan Remiorz

MONTREAL - Police arrested four of the hundreds of demonstrators who assembled as early as 7:30 a.m. in a protest that included a wide-range of grievances, including increased tuition hikes.

Students, unions and women's groups held a joint protest in a downtown area around the local stock exchange, as access to a hotel was cut off.

Riot police were called in and things became tense as officers unloaded the contents of some pepper spray cans into the crowd.

Four demonstrators were arrested and carted away in police vehicles, which caused other participants to attempt to block the vehicles' path while chanting for their release. A cameraman from one TV network was surrounded by protesters who shouted at him.

Tens of thousands of university students are also planning strikes in a throwback to the kind of protests in the 1990s that kept the then-Parti Quebecois government from raising attrition fees. Student rates have been largely frozen in Quebec, for most of the last 40 years.

But the current Liberal government of Jean Charest wants to change that.

Quebec's university tuition fees are so low that, even with an annual $325 hike planned over the next five years _ which would nearly double current rates _ they would still be the lowest in the country.

The protesters argue, however, that the increase will keep some people from obtaining a higher education and they call it a question of societal values.

Some of the demonstrators were voicing their opposition to the privatization of public services, others were picketing against rising electricity rates, others were opposing higher university tuition fees of $325 per year for five years, and others were taking aim at the health contribution that every citizen has to pay in his tax return: $ 50 in 2010, $ 100 in 2011 and $ 200 in 2012.

"We're here mainly to protest against rising tuition fees," said Leo Bureau-Blouin, president of the Federation of College Students. "We are concerned about the impact it will have, not only students but also on middle class families who are struggling to make ends meet."

"We made several small-scale events but today we are raising the tone, not only students but also community groups, women's groups, trade unions. We decided to unite in intergenerational equity," added Bureau-Blouin.

FRAPRU, which frequently demonstrates in favour of more subsidized housing for the poor, participated in the protest and its leader Francois Saillant urged higher taxes on business.

In Quebec, the Minister Raymond Bachand said that the protest went overboard. "People have the right to demonstrate and express their rights, but they do not have the right to prevent others from working. Everyone has rights in society and it must be done with respect. They have the right to protest but to block the city center, that's prohibited and is unacceptable in a society," he said.