Cyclists in Montreal get a lot of tickets.

Montreal police lead the country in handing out tickets to cyclists with a report showing cyclists in the city are targeted 42 times more than in Toronto.

Last year, over 12,000 cyclists were ticketed in Montreal compared to just under 400 for the second-highest city: Vancouver, numbers compiled by the Toronto Sun.

The leading causes for tickets were cyclists running red lights and stop signs, riding with earbuds in and not respecting road signs.

CTV News spoke to one cyclist who felt those riding bikes are targeted unfairly.

"I don't really see what cyclists are doing wrong here," she said. "I think people are pretty respectful on the road relatively. We'll fly through reds sometimes, but we always check if anybody's coming."

"You have to bear in mind that in the past couple of years, we've seen the number of cyclists increase substantially in Montreal," said Andre Durocher of the Montreal police.

It's all comparative, said Durocher.

"Last year we gave over 420,000 tickets to motorists, so the number of 12,000 for cyclists… is actually less than three per cent of the tickets that were given," he said. 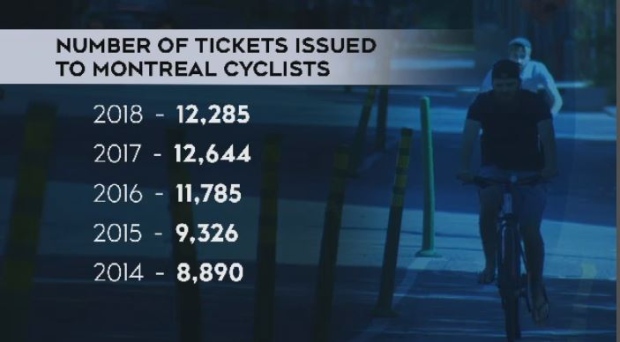