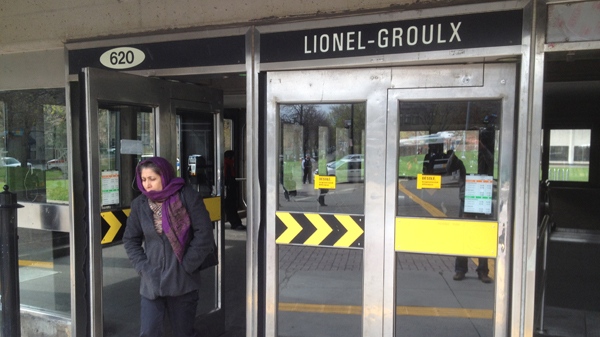 Lionel Groulx metro station was evacuated after a smoke bomb went off on the orange line (April 25, 2012, CTV Montreal/Jason Clarke)

MONTREAL - Multiple smoke bombs were set off in the metro system Wednesday morning, and no group has yet claimed responsibility.

Commuters in the Lionel Groulx station smelled smoke at 9:40 a.m. and the station was evacuated, as were five adjacent stations.

Police were able to find the cause of the smoke fairly quickly, and within 20 minutes service resumed on the orange line.

However an hour later, another smoke bomb was set off at the Henri Bourassa station.

This time service was interrupted from the end of the line, Montmorency, through to the Berri-UQAM station.

The STM diverted buses to transfer the stranded passengers until the smoke was cleared.

Montreal police are looking for five people in connection with disruptions on the metro system last week.

Police have released photos of five people suspected of throwing bricks on the tracks and pulling the train's emergency brakes.

The actions, believed to be part of the student protests against tuition hikes, caused considerable delays on the metro and affected hundreds of thousands of people.