MONTREAL -- Quebec authorities spoke out Monday about the need to fight racism, while condemning the looting and vandalism that followed a Montreal demonstration demanding justice for a black man who died following a police intervention in Minnesota.

Eleven people were arrested after tensions flared between pockets of protesters and police on Sunday night following a demonstration to denounce racism and police impunity in both Canada and the United States.

It was one of many protests held across North America following the death of George Floyd, who died in Minneapolis last week after pleading for air while a white police officer pressed a knee on his neck.

Speaking on Monday, Premier Francois Legault called on Quebecers to fight racism -- even as he denied the existence of systemic discrimination in his province.

"All humans are equal, are all the same, regardless of the colour of their skin," said Legault, who described Floyd's death as "shocking and revolting."

But in contrast to Prime Minister Justin Trudeau, who bluntly stated Monday that "anti-black racism is real" and "systemic discrimination is real," Legault continued to deny the existence of systemic racism in his province.

Legault also denounced the few people who smashed windows and looted stores after Sunday's protest, calling their actions unacceptable. "I don't think it helps the cause to do that," he said.

Montreal police spokesperson Raphaël Bergeron told CTV News on Monday that more people may be arrested once police analyze surveillance videos from stores and "images they were able to obtain from the protest." So far police have received 70 reports of damage to stores.

Among those targeted was Steve's Music Store on Ste-Catherine St., where looters smashed windows and stole guitars and other valuable equipment, according to an employee reached by phone.

"We don't even know (the extent of the damage). It just looks like a hurricane came through here," said Lenny Lanteigne, who added that some protesters used guitars to smash other guitars.

Lanteigne said it was regrettable to see what he described as "group of hooligans" hijacking an important and necessary cause, adding that he was relieved nobody was hurt.

Montreal Mayor Valérie Plante tweeted on Monday condemning the actions of "the looters who ransacked the shops and have nothing to do with this peaceful protest," after saying the protest itself was noble and necessary.

About three hours after the march that snaked its way through downtown Montreal on Sunday afternoon had ended, Montreal police declared the gathering illegal after they say projectiles were thrown at officers who responded with pepper spray and tear gas.

Warning to the #manifencours : Because of the infractions that are committed, we order everyone to disperse and leave the area immediately.

Tensions flared after the formal rally had concluded and some demonstrators made their way back to the starting point, in the shadow of Montreal police headquarters downtown.

Windows were smashed, fires were set and the situation degenerated into an hours-long game of cat-and-mouse between pockets of protesters and police trying to disperse them. 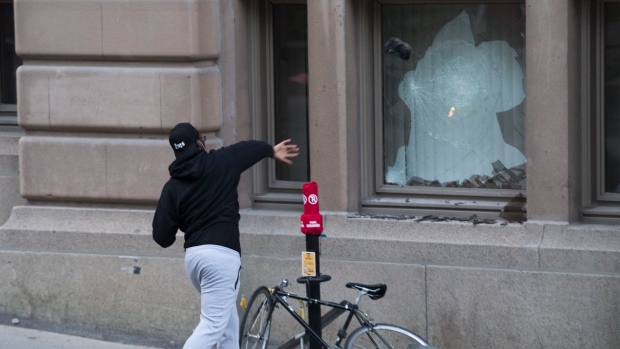 Some people were seen looting local businesses, including a music store, a fast-food restaurant and a sex shop along Ste-Catherine St. E., not far from Montreal police headquarters on St-Urbain St.

The STM, Montreal's public transit authority, shut down service on a part of the Montreal metro's green line, which covers the stretch of downtown where Montreal's police headquarters are located, for about an hour starting around 9 p.m. on Sunday.

Demonstrators had gathered to denounce racist violence and police impunity before marching -- both in the U.S. and at home.

“Racism is a Quebec Problem Too,” “Black Lives Matter” and other slogans were written across signs from the thousands who started gathering around 4:30 p.m. at the corner of Maisonneuve Blvd. and St. Urbain St.

The protesters joined the massive protests and unrest across the continent and internationally sparked by the death of George Floyd – the Black man who died after being pinned under the knee of a white Minneapolis police officer, who has been charged with murder.

Over 2 hours in still very peaceful. Demonstrators are now clapping and dancing on the corner of René Lévesque and Cathedrale #CJAD800 pic.twitter.com/QaP6iuzquC

Organizers drew attention to Floyd's death, but also others across the United States and Canada. They publicized the event on the Justice for George Floyd & All victims of police racism Facebook event.

"It's important for everyone to be here today so that we can have a lot of voices to say the George Floyd event is not a singular event," said Marie-Livia Beauge, one of the Montreal protest organizers. "It keeps happening and it's happening here in Montreal so to be here together is to show solidarity and denounce the injustice."

Montreal police were out in large numbers to watch the crowds, and organizers attempted to keep people physically distant from each other without much success. The vast majority of protesters came with masks.

Around the start of the demonstration, Montreal police took the unusual step of issuing a tweet saying they were dismayed by the death of George Floyd.

"Both the action taken and the inaction of the witnesses present go against the values of our organization," the force tweeted calling on for a peaceful demonstration.

"We respect the rights and the need of everyone to speak out against this violence and will be by your side to ensure your safety," the police said.

After having listened to several speeches, the demonstrators headed for the American consulate. 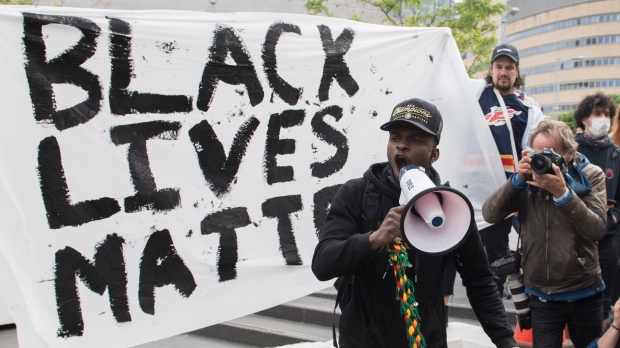 Similar rallies took place outside the United States in London, Copenhagen and Berlin over the weekend as well. Thousands of Torontonians took to the streets Saturday, a few days after the death of Régis Korchinski-Paquet, who fell from the balcony of a 24th-floor apartment in the presence of police.

In a series of posts on Twitter on Sunday, Plante condemned "violence, racism and systemic discrimination."

"No matter the status, origin or skin color, everyone has the right to expect fair and equitable treatment and I will not make any compromises in this regard in Montreal. The City is engaged in a major project to combat racial and social profiling," she wrote.

Her message was badly received by activists who took turns on the microphone before the start of the march to demand more concrete actions.

"Where is she?" asked social worker Vincent Mousseau, cautioning against empty words from leaders. "In fighting this, we need to ensure our movements are not co-opted to stifle our anger with their kind word and simultaneous inaction."

Quebec Premier François Legault also sent a tweet on Sunday evening expressing his thoughts on Floyd's death as well as racism in general.