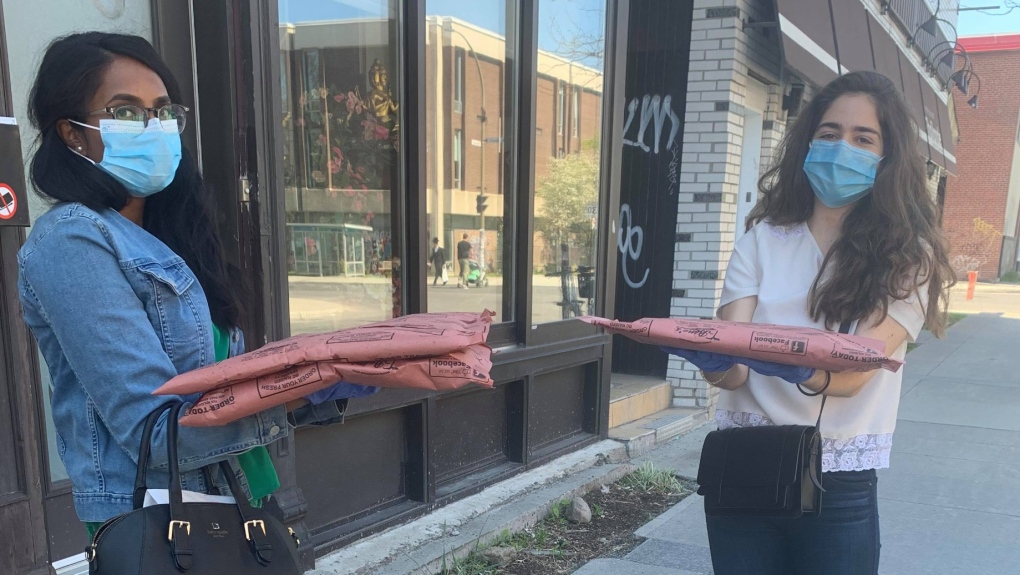 Meet the Need Mtl began in April 2020 as an organization to help food banks and non-profits deal with the increased demand.

MONTREAL -- Many Montrealers are struggling to put food on the table due to job losses on top of lockdown restrictions, organization leaders say.

The Notre-Dame-de-Grace–Côte-Des-Neiges borough has some of the highest infection numbers in the city, and some residents are dealing with food insecurity, said Jean-Sebastien Patrice, executive director at MultiCaf, an organization that provides food and other resources to low-income people living in the area.

Côte-Des-Neiges has a large number of people working in the essential services sector, said Patrice, and they aren’t able to stay home, contributing to higher infection rates.

When lockdown and quarantine measures went into effect in March 2020, demand for MultiCaf’s services increased drastically. Prior to COVID-19, Patrice said that MultiCaf served around 1,500 people on a weekly basis; by May 2020, they were serving over 9,000 people weekly.

Though they are now serving fewer people (an estimated 6,000 people weekly since May), Patrice said MultiCaf has adopted a new system to serve everyone they possibly can.

“We changed the way we worked so that we use the people we are serving as volunteers. During COVID, people who were using our service, they came to help at the same time. So it was a real community,” Patrice said.

Food insecurity happens when people have to change their eating patterns – often going without – because they can’t afford enough food. But the pandemic has brought a new level of complexity to food insecurity, said Davia Nielsen, an assistant professor in the school of human nutrition at McGill University.

“What’s really interesting about the pandemic is it’s added this new layer, where it’s actually the physical ability to access food because of these restrictions,” Nielsen said.

Patrice said that many people using MultiCaf have lost their jobs or have had their working hours reduced.

When job loss and economic disparity are combined with lockdown measures such as reduced public transit hours and grocery stores closing early, more people can become vulnerable to food insecurity.

Raiss Zaidi lives in the Hochelaga-Maisonneuve borough, another area that has a lot of COVID-19 cases.

Zaidi said that even before COVID, it was difficult to access fresh foods, as the nearest grocery store is at least a 15-minute walk.

“There’s a lot of older people, retired people, on my street. I don’t see them walking that distance all the time to get fresh fruit,” Zaidi said.

Now with the imposed lockdown measures, accessing food is even more difficult. When people work all day, and then the nearest grocery store closes at 7:30 p.m., it makes it much harder for people to get the food they need, Zaidi explained.

Noticing the level of food insecurity in his neighbourhood, Zaidi began distributing leftover food from food banks and re-distributing it to the public. He eventually started a Facebook page called Le Pirate Vert to reach more people in need.

Like MultiCaf, Zaidi said the demand for Le Pirate Vert’s services has increased drastically since the pandemic started.

“On the 25th of December, we did a distribution in front of my place. We were there for about 12 hours, and we counted roughly about 300 people that came by and picked up food,” Zaidi said, adding that the turnout was much higher than they were expecting.

Patrice said that MultiCaf has also struggled to keep up with the increasing demand.

“We don't say no to anybody. That's what the main issue is. We wanted to help each person, each family, each child,” Patrice said.

Meet the Need Mtl is an organization that began in April 2020 to help food banks and non-profits deal with the increased demand.

Some of their initiatives involve fundraising and event hosting, but they try to focus most of their efforts on volunteer recruitment.

“A big proportion of the volunteer workforce was lost due to social distancing measures, and the lack of PPE,” said co-founder Diana Benea.

A student-run organization, Meet the Need MTL uses social media to reach a large audience in an attempt to recruit as many volunteers as possible.

IS THE END IN SIGHT?

When the public health situation improves, physical access to food should become easier. But those that will feel a long-term impact will be those who’ve experienced job loss and economic disparity, Nielsen explained.

Benea said food insecurity was a problem before the pandemic, and it will continue long after the vaccine has been administered.

“I definitely think that everyone should know that this is not a temporary issue and neither has it been in the past. It’s always present,” Benea said.