The event will begin at the Claude-Robillard sports complex, in the Ahuntsic neighbourhood. The protesters will walk to Trudeau's office, located nearby, at 1100 Crémazie Blvd. East.

On Friday, a procession made up of a dozen tractors travelled from Chateauguay, on Montreal's South Shore, to downtown Montreal to protest near CN's head office and denounce the lack of propane gas, a headache for many farmers.

The UPA denounces what it considers to be the federal government's lack of sensitivity on this issue.

"The Canadian government does not seem to grasp the extent of the crisis experienced by thousands of farmers in Quebec who ask him (Trudeau) to quickly find a solution," said the organization in a statement released Saturday.

Meeting with the PLQ

While in Sherbrooke, where he met Liberal Party of Quebec interim leader Pierre Arcand and the agriculture spokesperson for the party Marie Montpetit, the president of the UPA, Marcel Groleau, said he wanted "Mr. Trudeau and his team to put pressure on CN to prioritize the transportation of propane to its customers."

Groleau pointed out that grain producers are not the only ones who would be affected by a possible shortage of propane, citing hog, calf and poultry farmers in particular. 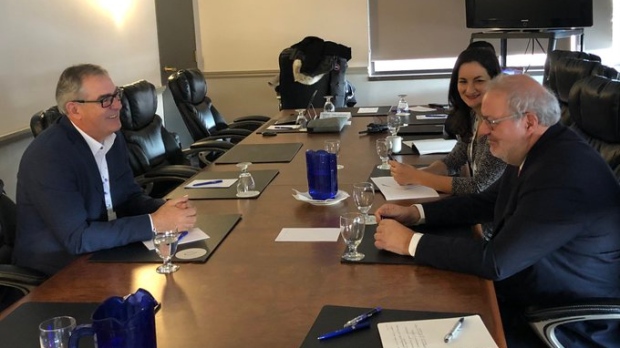 "The phone will not stop ringing. Producers want an indication of when deliveries will resume," he said. "There is a lot of concern. In the coming days, it will become dramatic for some of them."

For her part, Montpetit said the situation was "alarming and worrying".

"We wanted to meet Groleau because there is more and more stress and distress among farmers in Quebec," she said.

The day before, the Quebec government said it believed it had enough propane to meet the needs deemed essential for about a week.

The Minister of Energy and Natural Resources, Jonatan Julien, announced that cars carrying 7 million litres of propane will be sent to Beauharnois, Saint-Hyacinthe and Lévis for distribution. A convoy from Edmonton carrying about 7 million litres of this gas is also heading for the province.

Groleau lamented Saturday about the lack of information on the availability of this stock.