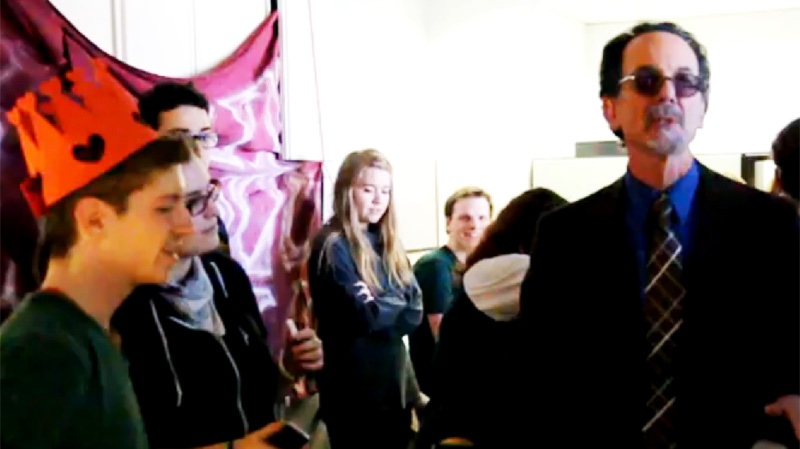 McGill students were attempting to get changes to the QPIRG decision through a sit-in on Wednesday. (Image taken from YouTube video)

MONTREAL - Late Thursday afternoon the power went off in a part of the campus occupied by some students protesting McGill's policies by holding a sit-in that began Tuesday.

According to protester Jaime McLean, McGill brass had closed the power to the room they students have been occupying, as a result they can no longer charge their phones or computers.

About 20 protesters vowed to sleep outside the building Thursday night to make their voices heard.

A few dozen McGill students have been sitting in at the James Administration building over a disagreement with administrators over funding for the Quebec Public Interest Research Group-McGill and campus radio station CKUT.

The students have been camping outside the sixth floor office of McGill Deputy Provost Morton Mendelson as well as on the first floor.

Some complained that they had been refused entry to the bathroom facilities and were not allowed to return once they had left.

The students are upset that university brass declined to recognize the results of a student referendum held in early November where two-thirds of students voted in favour of the continued funding of QPIRG and CKUT. Both groups are funded directly through students fees, however McGill unilaterally allowed students to stop paying the fees online in 2007.

According to protesters, the university has since run a campaign to encourage students to "opt-out" of the fees, crippling both organizations. The protesters argued that the left-wing politics of QPIRG and CKUT were to blame.

The administrators responded in late-January by saying that the question students approved was unclear.

The two sides have met but failed to come to a resolution.

QPIRG provides resources to students with projects that have a, "mandate of social justice and environmental activism."

Douglas Sweet, Director of Communications at Mcgill told CTV Montreal Wednesday morning that the administration has handed out letters to protesters warning them that they would be disciplined according to the student code of conduct.

He said that the administrators are still attempting to conduct an open dialogue with the demonstrators but did not rule out other measures if that failed. He did not say whether calling police could be called in.

Scenes from the conflict can be seen in the video below, made available to CTV Montreal by Le Delit Francais.

As of 4:00 p.m. on Wednesday, 22 students continued to occupy the sixth floor and were posting statements to a website.

Events can also be followed on Twitter with the hashtag: #6party.