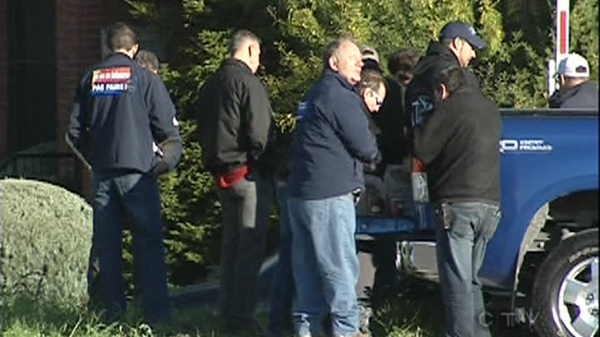 Construction workers belonging to the Quebec Federation of Labour (FTQ) blocked the entrances to the Construction Commission of Quebec this morning (Oct. 11, 2011)

MONTREAL - Several dozen construction workers blocked the entrances to the Montreal offices of the Construction Commission of Quebec to voice their displeasure over proposed legislation that would strip unions of some of their power.

Protests happened at the CCQ headquarters at Cremazie Blvd. and Christophe Colomb Ave., as well as offices on Jean Talon West Blvd. and in Quebec City.

Right now employers often let construction unions decide how many employees are needed at a work site, and who is eligible to work.

The Quebec Federation of Labour (FTQ-Construction) and the Provincial/International Construction Council (CPQMCI) want this practice to continue, while another large construction union, the CSN, has no objections to the bill.

Earlier this year a task force led by the CCQ found that under the current regime more workers than necessary were often at construction sites.

Bill 33 is designed to end that practice. It will also let the CCQ create a roster of eligible construction employees for any given job site, in an attempt to eliminate hiring prejudices against non-unionized workers.