'Blood on his hands': Montreal restaurant has been threatened by animal rights activists, owners say 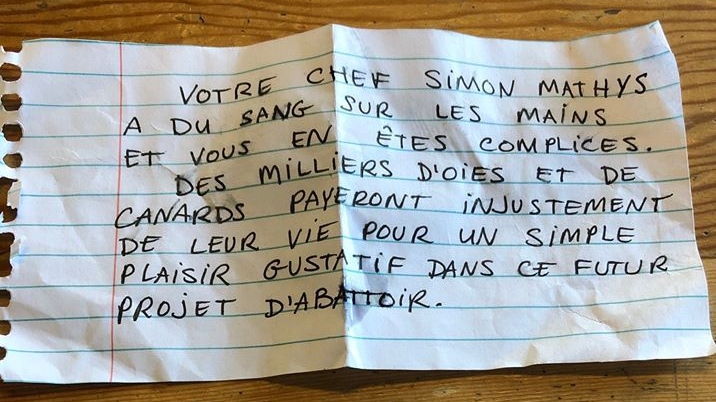 Restaurant Manitoba says it received a threatening note from a group that identifies as fighting for animal rights.

MONTREAL -- A restaurant in Montreal’s Mile-Ex neighbourhood has received a threatening note from a group of animal rights activists, its owners say.

The note claims that the restaurant’s chef has “blood on his hands and you’re his accomplices.”

It continues to insist that thousands of geese and ducks will pay with their lives to satisfy the "simple pleasure of taste."

The restaurant took to Facebook to defend its practices, saying “we have been working for six years to promote Quebec's culinary identity.”

“We always think about the impact of our food on the environment. We encourage local farmers who quietly produce a variety of vegetables and animals,” it stated. “When we sacrifice an animal’s life to nourish our bodies and our minds, we pay tribute, we value each piece and we connect to it.”

The establishment goes on to say that it does not produce dishes with meat simply for pleasure.

“The problem is not what we eat. It is who we buy from. Industrial production is destroying our world and we think what will save it, or at least slow it down, is the adoption of a holistic vision of food,” it said.

“Yes, we have blood on our hands – that of animals that had happy lives, surrounded by nature and fundamentally good humans. We will think about your criticism and we will evolve, but we would like to see your militant energy focus on disconnected mega-producers rather than with restaurateurs.”

This isn’t the first time animal rights protesters have targetted a restaurant in Montreal. Earlier this month, a group marched into Joe Beef, in Montreal’s Sud-Ouest borough, during dinner time to demand that the restaurant cease serving meat.

The owners of Restaurant Manitoba have filed a report with Montreal police.