Here are five things to watch out for as the CAQ leader prepares to name his new cabinet and begins to make good on his party's election promises.

The Coalition Avenir Quebec has promised to distribute up to $600 to Quebecers in December to help with the cost of living.

Adults making less than $50,000 are to receive a one-time payment of $600, and people with annual incomes between $50,000 and $100,000 will receive $400. Legault has also promised to cut income taxes by a total of 2.5 per cent over the next decade, with a first cut aimed at the two lowest tax brackets in 2023. Legault says one his government's first priorities is to adopt a law capping government-controlled fees, such as driver's licences.

The CAQ has committed to cutting greenhouse gases by 37.5 per cent, compared with 1990 levels, by 2030, and it is aiming for the province to have net-zero emissions by 2050. 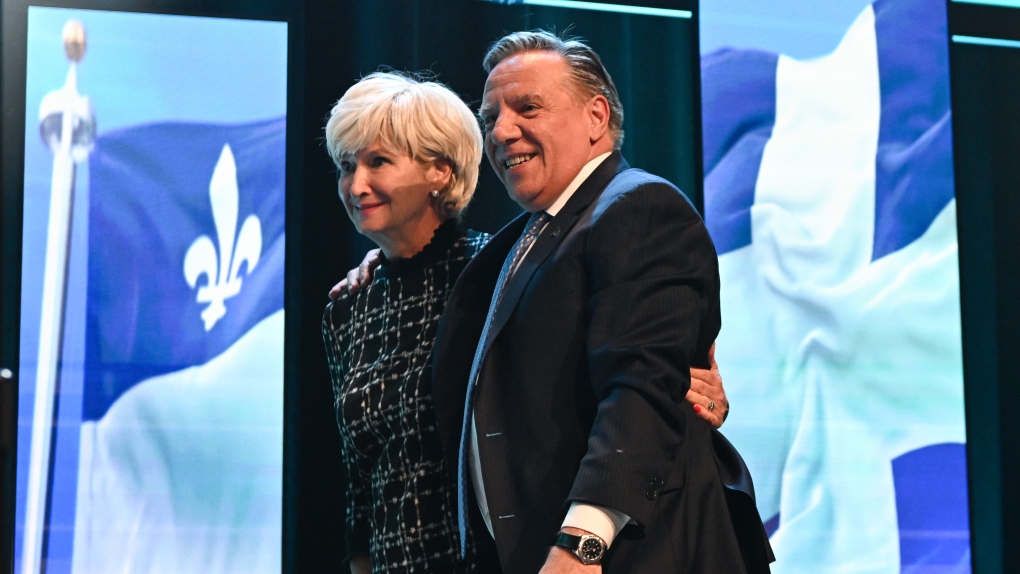 Coalition Avenir Quebec Leader Francois Legault walks on the stage with his wife Isabelle Brais to speak to supporters after his victory Monday, October 3, 2022 in Quebec City. THE CANADIAN PRESS / Jacques Boissinot

Legault says the only way to reach those goals is to build more hydroelectric dams, and he says he will order the province's hydro utility to analyze which rivers can be dammed.

The province, however, missed its previous emissions-reduction goal, and experts have said Quebec won't achieve its current targets without a more aggressive approach.

Legault has backed away from his 2018 promise to give each Quebecer access to a family doctor. Instead, he has committed to building a digital health platform to direct people to a health-care professional, such as a doctor, nurse or pharmacist.

The CAQ has also promised to invest $400 million to recruit 660 doctors and 5,000 health professionals, and the party has said it will open two private medical centres by 2025 in Montreal and Quebec City that would offer health services subsidized by the public insurance system.

Legault has also said Christian Dube will remain as health minister in the next cabinet.

The CAQ has promised to maintain immigration levels at roughly 50,000 newcomers a year and has said that the province doesn't have the capacity to properly integrate more people and teach them French. Legault has said he will create incentives for immigrants to move to Quebec City and to regions outside the Montreal area.

Immigration was the topic that tripped up the CAQ the most during the election campaign, and Legault's opponents have accused him of stoking fears of immigrants and dividing Quebecers on the issue.

Legault had to walk back comments tying immigration with "violence" and "extremism," and his campaign suffered a blow after incumbent Immigration Minister Jean Boulet said 80 per cent of immigrants to Quebec "don't vote" and "don't speak French."

On Monday night, Legault lauded the record number of women from all parties elected to the legislature -- in total, 58 of the province's 125 seats were won by women. The CAQ elected 41 women to its caucus, and among them is Kateri Champagne Jourdain, the first Indigenous woman to win a seat in the legislature; she won the riding of Duplessis, located in the Cote-Nord region.

In 2018, Legault fulfilled a promise to form a gender-balanced cabinet, giving portfolios to 13 men and 13 women. That parity was short-lived, however, because just after three months, MarieChantal Chasse resigned as environment minister and was replaced by Benoit Charette. Legault has not committed to having gender parity in his new cabinet.