Two weeks into the Quebec election campaign and François Legault is far ahead in the polls, poised to be re-elected with a majority government.

But much of the Coalition Avenir Québec (CAQ) leader's campaign -- not to mention his four years as premier -- has been marked by controversy.

Between Bills 96 and 21 and his recent comments on immigration, the outgoing premier has faced fierce backlash from anglophones, religious minorities and newcomers alike.

In a rare interview with English media, Legault defended some of his most controversial moves as both party leader and premier.

In Legault's view, limiting immigration is key to protecting the French language in Quebec and by extension, the province itself.

Speaking to CTV News Anchor Maya Johnson on Tuesday, Legault emphasized the importance of what he called "national cohesion."

"Our nation, in Quebec, is based around French," he argued.

Legault held firm to his belief that immigration leads to integration issues.

"All countries, all states in the world, they have a challenge to integrate new immigrants to their values," he told CTV News. "And the main [value] where we have a big challenge in Quebec is our language, French, which will be always vulnerable."

Last week, the CAQ leader came under fire after comments linking immigration to "violence" and "extremists."

Legault later apologized for his remarks on Twitter, but it didn't stop swift criticism from other party leaders and even the federal heritage minister.

Legault's comments on immigration, as well as his government's plan to have newcomers receive services only in French after six months of their arrival, have also drawn criticism in the context of the labour shortage.

When asked about the backlash on Tuesday, Legault pointed to what he called the "good impacts" of the shortage.

He said it puts workers at an advantage, as many employers have resorted to upping their pay to attract staff.

"There are some negative impacts, but positive impacts also," Legault said. "I think that Quebecers are happy to see their salaries finally increasing, reducing our gap with the average salary, for example, in Ontario." 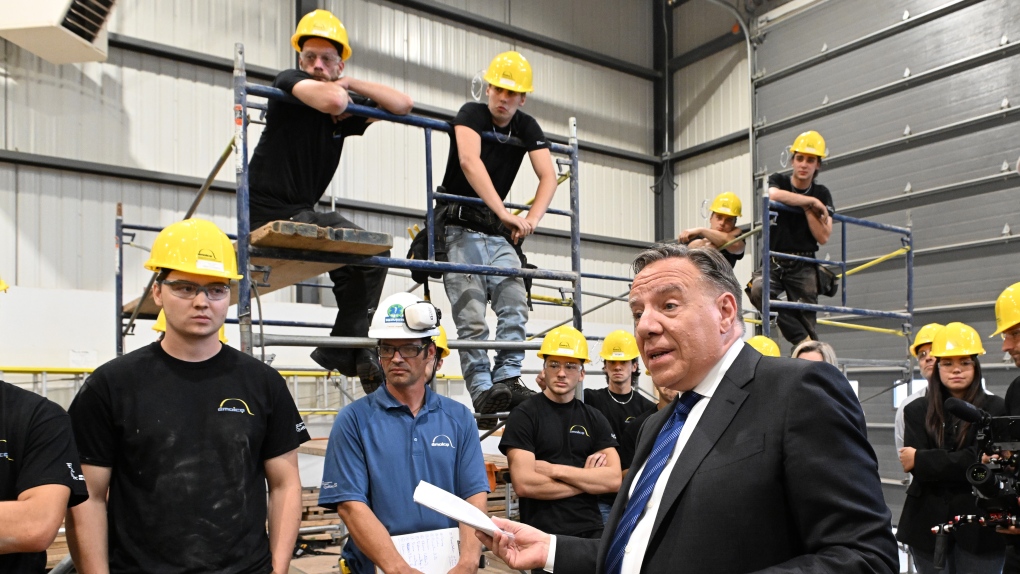 Coalition Avenir Quebec Leader Francois Legault chats with students at a construction school, in Quebec City, Thursday, Sept. 1, 2022. Quebecers are going to the polls for a general election on Oct. 3. THE CANADIAN PRESS/Jacques Boissinot

In addition, Legault said immigration isn't the only way to fight the effects of the labour crisis.

He argued that by embracing new technologies, particularly in the realm of automation, the manufacturing industry could maximize the productivity of its individual workers.

"I think we have to continue to install more robots to modernize our manufacturing business in order to increase the production per employee," the premier said. "We were able to increase our productivity in Quebec by five per cent in the last four years. In Ontario, the increase was only one per cent."

Despite the promise of technological advances, the manufacturing industry has called for more bodies on the working room floor.

In July, a group representing Quebec manufacturing companies implored the government to increase the annual immigration threshold to 90,000 to help ease the strain on the industry.

Yet, the CAQ still plans to cap immigration at 50,000 people annually, consistent with immigration thresholds from previous years, excluding 2022 when the cap was raised to 70,000 to compensate for the deficit caused by the COVID-19 pandemic.

According to a June Statistics Canada report, the unemployment-to-job vacancy ratio in Quebec went from 2.3 in 2021 to 1.0 in 2022.

The province is tied with British Columbia for the lowest ratio in the country.

Controversial language law Bill 96 has been widely denounced by some anglophones, legal experts, and other linguistic minorities.

However, Legault, who called the bill "reasonable and balanced," says he doesn't want the law to push English-speaking voters away. 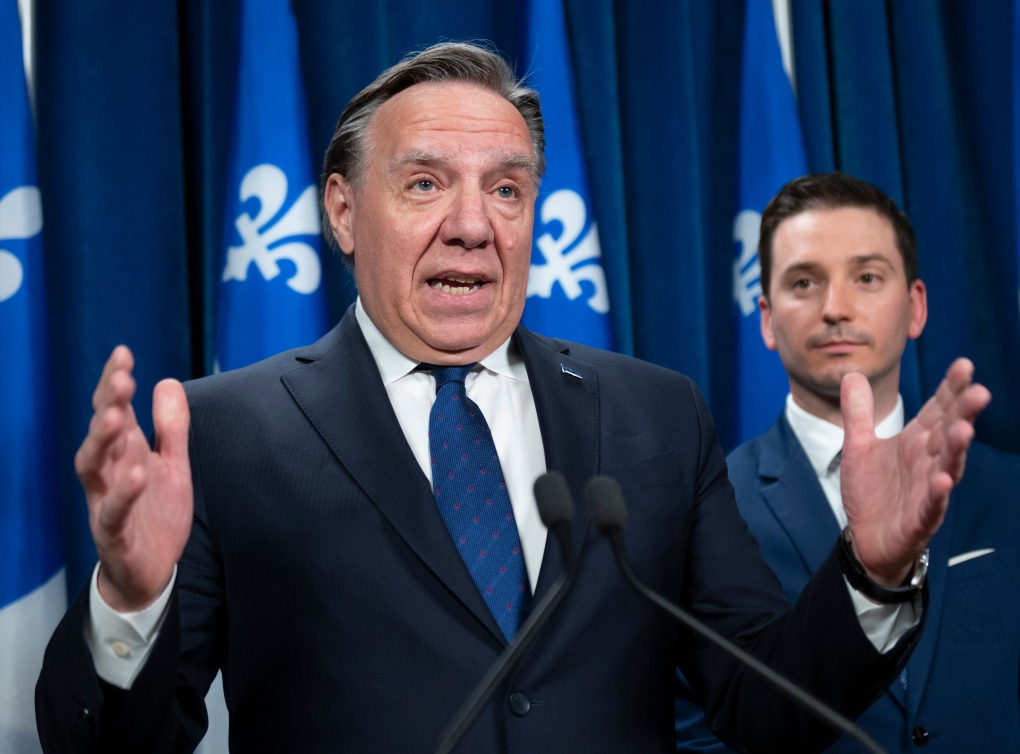 Although it's not yet clear how all aspects of Bill 96 will be enforced, one of its provisions would require immigrants to receive services exclusively in French after six months in Quebec.

According to Legault, this particular objective has been misunderstood.

Newcomers will be given half-a-year to receive government information in their native tongue, he noted, after which communications will switch to French.

The goal is not for immigrants to actually learn French within this time frame, he said, but to send a message that French is the official language.

"Some people said, it 'doesn't make sense to learn French in six months.' That was not the objective," he insisted. "We're ready to accommodate new immigrants for six months, but I think it's important to say that the official language in Quebec is French, and we have to send a signal to new immigrants."

This facet of Bill 96 has been protested in particular by tech companies, 37 of which signed a letter asking the government to pause French-language requirements for immigrants.

Legault said newcomers who have difficulty navigating services after six months may seek out "neighbours or any [organization] to help them with French."

The other bill on the minds of many Quebecers this election is Bill 21.

The secularism law prohibits Quebecers in some public service positions from wearing religious symbols at work.

Legault said it's a necessary step in learning from the past.

"For a long moment, religion, Catholicism, was very present in Quebec and I think that right now, secularism is very important," he said. "We think that when you're in a position of authority, you should not wear a religious sign." 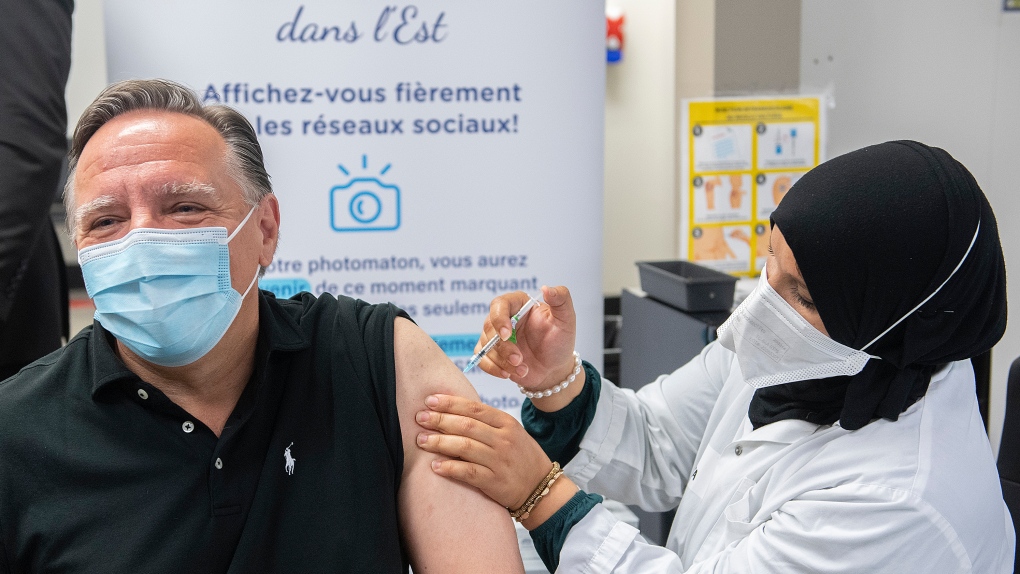 In August, a study from the Association for Canadian Studies (ACS) found religious minorities in Quebec, particularly women, feel less safe and less welcome since Bill 21 was passed.

For example, 73 per cent of Muslim women reported a decline in their sense of safety in public over the last three years.

To these women, Legault makes a request: think about the person receiving the service.

"I can understand that they may feel that they don't have access [...] to a job where they can wear a religious sign," he said. "But please think about the person receiving the service. I think that person, they have to have in front of them, a neutrality."

CAQ LEADING IN THE POLLS

Despite his controversial remarks, Legault is pulling far ahead in the polls, with his party hovering at 40 per cent of voting intentions.

Meanwhile, the Quebec Liberals (PLQ) and the Quebec Conservatives (PCQ) are at 17 per cent of voting intentions, respectively.

Next in line is Québec solidaire (QS) at 13 per cent, followed by Parti Québécois (PQ) at 10 per cent.