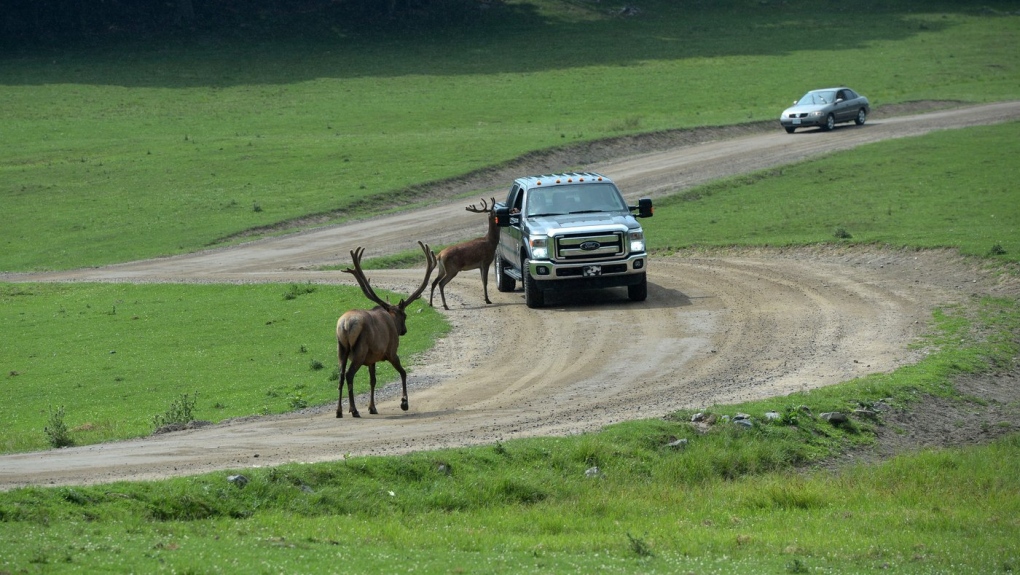 Cars make their way among the elk at Omega animal park in Montebello, Que., on Wednesday, July 13, 2016. Two Quebec men will appear in a Gatineau, Que., court today after they were charged for allegedly breaking into the park and killing three wild boars and an elk. THE CANADIAN PRESS/Sean Kilpatrick

Two Quebec men appeared in a Gatineau, Que., courtroom Friday on charges that they broke into a safari animal park and killed three wild boar and one elk.

Provincial police allege Mathieu Godard, 47, and Jeremiah Mathias-Polson, 21, had four animal carcasses in their vehicle when they were arrested Nov. 10 inside Omega animal park, located about 130 kilometres northwest of Montreal.

The two have been charged with wilfully killing animals kept for a lawful purpose, breaking and entering, illegally transporting firearms, and unlawfully firing a firearm during a break and enter.

Godard was released with conditions on Monday and is prohibited from going to the animal park in Montebello, Que., communicating with Mathias-Polson, carrying a firearm, and consuming drugs or alcohol.

Mathias-Polson was on probation at the time of his arrest and remains in custody. His bail hearing was set for Dec. 1. Godard is also expected in court the same day.

Parc Omega spokesperson Billie-Prisca Giroux said in a recent news release that the park's customers are safe and the incident was an "isolated event."

"We have put all the necessary efforts in place to ensure that this situation does not happen again, for everyone's safety and for the safety of our precious animals," Giroux said.

According to his social media account, Godard is a professional hunting guide. He declined a request for comment.

Provincial police spokesperson Marc Tessier said in a recent interview that a security guard at the park called 911 at around 9:30 p.m. on Nov. 10 after noticing a break-in.

"A few minutes later, the guard heard noises similar to gunshots," Tessier said. "The police quickly arrived and located and intercepted a vehicle. Both men were arrested. Police found four animal carcasses inside the vehicle."

Elon Musk's Neuralink, a medical device company, is under federal investigation for potential animal-welfare violations amid internal staff complaints that its animal testing is being rushed, causing needless suffering and deaths, according to documents reviewed by Reuters and sources familiar with the investigation and company operations.

Forget that soda bottle or errant tube of toothpaste. One airline passenger thought it was a dandy idea to place a six-pack of sharp or potentially dangerous items into his carry-on bag at LaGuardia Airport in New York City on Sunday.

'The kind of leader I am': Smith accepts sovereignty act amendments from UCP caucus

Alberta's premier says she is OK with her caucus making changes to the sovereignty act bill she introduced last week, while the NDP argued it would be better to scrap it altogether.