'QuebecLeaks' launches with nothing to leak 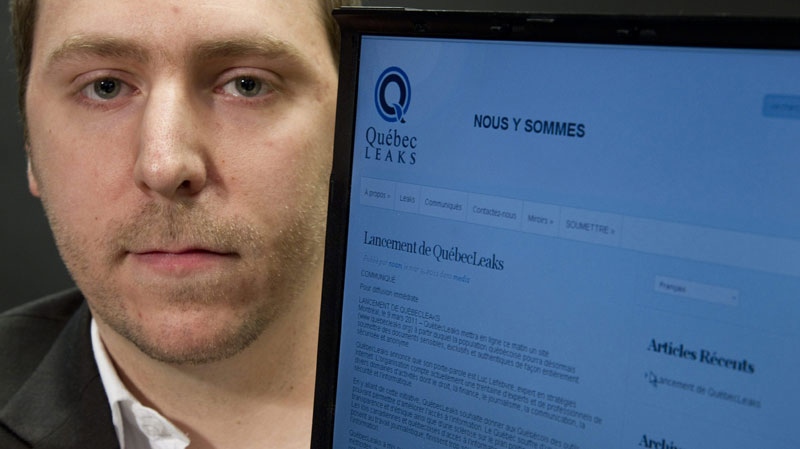 Quebec's own version of WikiLeaks launched on Wednesday but the tap was dry.

QuebecLeaks, the brainchild of a former Parti Quebecois member who quit the party in frustration, went public although its founder conceded he hadn't received any documents.

Luc Lefebvre, who formally revealed himself Wednesday as the face of the Quebec site, said he was inspired by the WikiLeaks model and plans to publish compromising documents in the province.

But Lefebvre told The Canadian Press he hadn't received any documents to release before the launch date. He had been soliciting submissions for about two weeks through his website.

The launch comes as Quebec has been engulfed in scandals surrounding political financing, questionable contracts and allegations of corruption in construction and public-works contracts.

Lefebvre insists he's not out to get any specific political party.

"The Liberal party (of Quebec) doesn't have a monopoly on corruption. There are other political parties and in those parties there are also situations that should be denounced,'' Lefebvre said.

"In the past I was involved with the Parti Quebecois _ which ended after a transparency problem with the party. I decided to end my militancy with the PQ.''

Lefebvre, who briefly sat on the executive of a riding association, left the PQ in early 2010 after publicly complaining about Leader Pauline Marois on Facebook.

Lefebvre said he expects he'll be the object of a backlash, legal action and threats.

A PQ spokesman, Manuel Dionne, said his party had no link to the organization. He also played down Lefebvre's role within the sovereigntist party.

His Liberal counterpart however, Michel Rochette, called the initiative, "partisan and militant.''

The president of the riding that Lefebvre was involved in said he only sat on the PQ's local executive for a few weeks.

Lefebvre said it was the current climate in Quebec, and the doubts raised by ties between the construction industry and politicians, that led him to create QuebecLeaks.

Lefebvre, who works in marketing for a large convenience-store chain, said the QuebecLeaks initiative is financed by its creators. He hopes to get financial assistance through public donations.

Lefebvre, co-founder of the platform, will be the only member to fully reveal his identity, while 30 other contributors will remain anonymous.