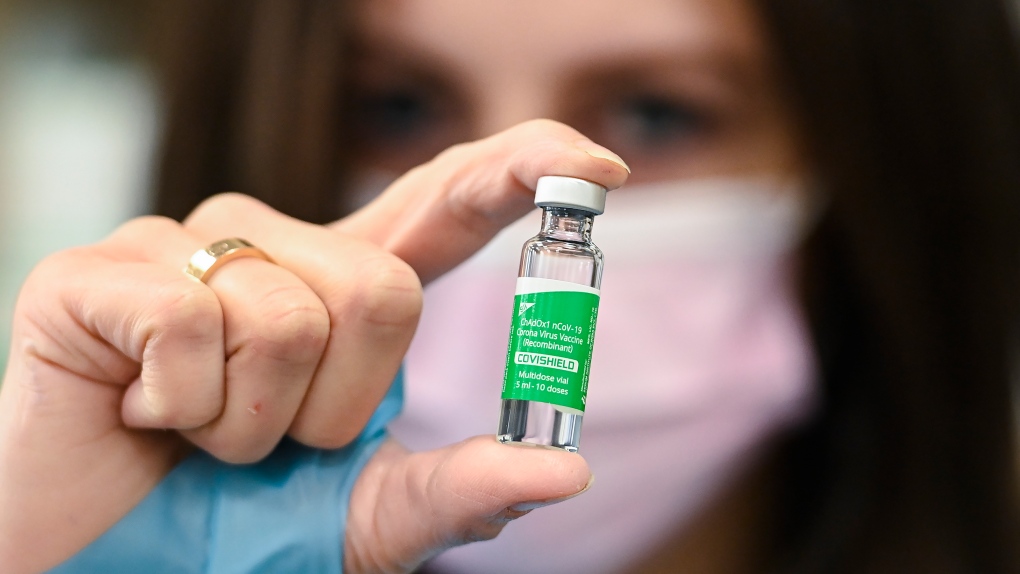 Pharmacist Barbara Violo shows off a vial of the Oxford-AstraZeneca COVID-19 in Toronto on Friday, March 12, 2021. THE CANADIAN PRESS/Nathan Denette

OTTAWA -- Quebecers are much more satisfied with their vaccination campaign than their Ontario neighbours, according to a new poll.

According to a survey carried out between March 26 and 28, 61 per cent of Quebecers are very satisfied or fairly satisfied with the administration of vaccines in their province.

Meanwhile, only 41 per cent of Ontarians express the same feelings.

In fact, according to the poll, which was conducted by the Association for Canadian Studies, Quebecers are the most satisfied in the country when it comes to vaccines, followed by 58 per cent of citizens of the Atlantic provinces.

In western Canada, only 42 per cent of those surveyed in Manitoba and Saskatchewan were satisfied with the immunization campaigns in their provinces. Things improve further west, with 51 per cent in Alberta satisfied and 50 in British Columbia satisfied.

The poll was conducted online with 1,523 people, using a method called non-probability sampling that relies on the researchers' judgment, trying to come up with a representative group, and is less strict than random selection. It's impossible to calculate the margin of error for it.

When the pollster looked at a very small subset respondents, those between 65 and 69 years old, he saw a gulf between opinion in Quebec and opinion in Ontario.

In this group, only 27 per cent of Ontarians said they were satisfied, compared to over 75 per cent of Quebecers.

Among Quebecers surveyed aged 70 and over, the satisfaction rate climbs to 87 per cent, while it is 41 per cent among Ontarians of the same age.

As of April 5, the Quebec government reported having vaccinated 18.3 per cent of its population with at least one dose.

In Ontario, whose population is 14,755,000, the government reports that 322,000 people have gotten two doses, and that 2.55 million doses overall have been given out to date.

This report by The Canadian Press was first published April 5, 2021, with files from CTV News.