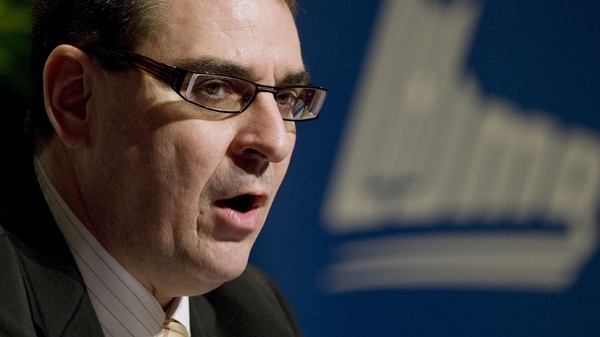 Commissioner of the QMJHL, Gilles Courteau, announces that Rouyn-Noranda Huskies forward Patrice Cormier has been suspended for the remainder of the 2009-2010 season at press conference in Boucherville, Que., on Monday, Jan. 25, 2010. (Peter McCabe / THE CANADIAN PRESS)

MONTREAL—A QMJHL playoff series filled with ugly scenes and bad blood after a bench-clearing brawl was provided with another dose of polemic thanks to a referee’s embarrassing gaffe.

The QMJHL semifinal series between the Baie-Comeau Drakkarand Blainville-Boisbriand Armada saw 12 players and both coaches suspended and fines levied after Wednesday’s on-ice brawl to close out the Armada’s 4-3 victory.

For Friday’s follow-up, Baie-Comeau beat the Armada 2-1 to take a 3-2 series lead. But Valentin Zykov’s winner at 2:55 of overtime was clearly offside.

“It’s so ridiculous. He's offside by two feet,” Blainville owner Joel Bouchard said after a heated, but fruitless, discussion with the referee on Friday. “The referee said his linesman has no doubts, that he made his call. (But) it wasn’t even close.”

The Quebec Major Junior Hockey League agreed with Bouchard--the former NHL Player who filled in for coach Jean-François Houle--saying it would institute video reviews for goals starting next season.

“The QMJHL has a very competent and passionate group of officials; because of the fast-paced nature of hockey sometimes things go unnoticed on the ice,” QMJHL commissioner Gilles Courteau said on Saturday. “It is for this reason that a technological aid will allow officials, during this type of situation, to make adjustments, if necessary, in order to make the right decision.”

Not only was Zykov’s winner clearly illegal, but Gabryel Paquin-Boudreau appeared to set up the winner with his hand by directing the puck on to the path of his teammate.

“From the bench I didn’t see anything out of the ordinary,” said Patrice Bosch, who was filling in for Drakkar coach Eric Veilleux. “It’s a shame there was an error, but we’ll take the win.”

The series has provided much talk this week since the Armada released New Jersey Devils prospect Stefan Matteau for deserting the team after Game 2. Matteau’s father Stephane is a former NHL player and assistant coach on the team.

The league also threatened to impose a $25,000 fine for "all inappropriate future behaviour" for the rest of the series.

The coaches were each suspended two games and can return if Blainville wins on Sunday to force a Game 7 on Tuesday.

The winner plays the Halifax Mooseheads in the final.