MONTREAL – A Boeing 737 Charter plane was forced to make an emergency landing at the Saint-Hubert airport Thursday night because of a blown tire.

The Chrono Aviation plane was flying in from Iqaluit, NU, with 92 people on board: 87 passengers and five crew members.

According to the company's vice-president, Dany Gagnon, the crew heard a loud explosion on takeoff and knew a tire had exploded.

He says they followed procedure and called ahead to the airport to warn them of the potentially rocky landing.

Gagnon adds the company does regular inspections of the plane, including the tires, every two to four days.

There were no reported injuries. Chrono Aviation operates one of the largest air charter fleets in Quebec. 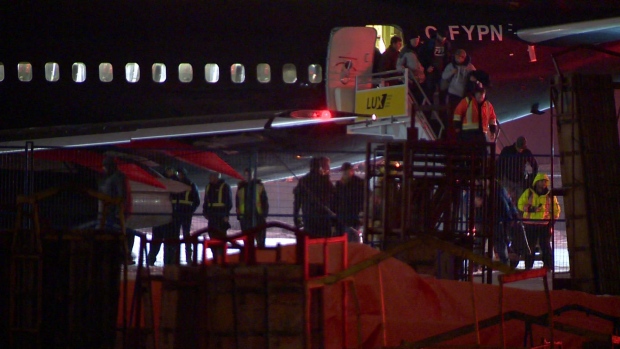 Planes flying in and out of the Saint-Hubert airport on Montreal’s south shore have created tension for residents living in Longueuil.

Several people showed up to a local council meeting Thursday night to complain about increased activity at the airport, saying the noise has gotten too loud.

Things apparently got heated after airport officials said there wasn’t much they could do about it.

Boeing 737 passenger plane made an emergency landing at Saint-Hubert Airport due to an exploded tire. None of the passengers or flight crew were injured. @CTVMontreal pic.twitter.com/D0ndWspCfd

Longueuil police officers were called in to remove some residents from the meeting; they eventually left on their own.