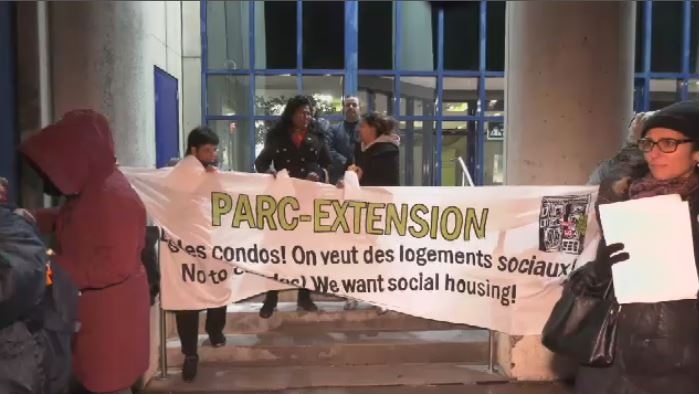 MONTREAL -- A group of protesters chanted and shouted on Tuesday evening against gentrification in Parc-Extension.

"Parc-ex is not for sale!" They cried outside the borough headquarters in Villeray--St-Michel--Parc-Extension.

Parc-Extension is one of Montreal's most diverse neighbourhoods. It's also one of the poorest working-class areas in Canada. Rent hikes and evictions are on the rise, pushing lower-income people out, said Mahmmod Raza Baig, a resident.

"The condition of apartments is no good, and in the light of gentrification, the poor Canadian citizens, they are being pushed by the landlord out of their apartment," he said.

The protestors assembled on Tuesday to oppose a new residential development in the area. Borough councillors are in the final stages of approving the project, which is at the centre of a broader fight over gentrification and affordability in the neighbourhood.

Groupe Montoni, a developer, purchased a building on Beaumont Avenue in Parc-Extension. The company wants to tear it down and erect a new residential building with 104 units ranging from studios to three-bedroom units.

Borough Councillor Mary Deros said affordable housing is coming -- just not to the Beaumont Avenue location. She didn't say where such a project would be built.

"I don't want to announce the place because they're still in negotiation," she said.

The borough council approved the Beaumont building's demolition in September, paving the way for the new residence. A community group, however, is fighting it. Amy Darwish, from the Parc-Extension Action Committee, said the space should be used to build affordable housing -- not a project that would contribute to gentrification.

"It was long a site the city had been considering for social housing before it was sold to Groupe Montoni," she said. "If the demolition goes through, it's going to most likely mean apartments that are too expensive for the vast majority of park extension residents."