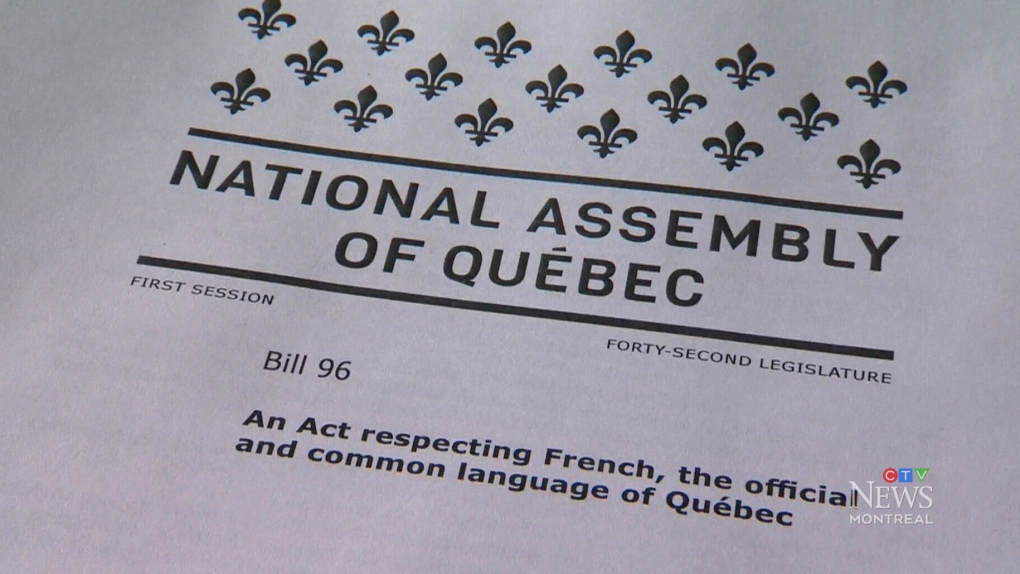 A second legal challenge has been filed against Bill 96, Quebec's new language law, focusing on one of its provisions that requires corporations to file translated court documents in French.

Several lawyers are collaborating and they've narrowly targeted this provision of the bill -- one which others have already raised as legally questionable, and which they say will affect a huge swath of Quebec businesses and other groups.

It will apply to "giants like Apple or Ubisoft, or it could be local depanneurs and clothing stores," said the group of lawyers that launched the challenge, which was filed in court on Tuesday.

But it would also extend to many other kinds of groups, or one-person businesses, making it more difficult and expensive for them to seek justice.

"It would impact First Nations communities when their governments or other community organizations try to access the courts," the lawyers said.

There are also "potential ricochet effects on individuals," especially since it's not clear yet how the requirement will be put into practice under the new law.

Bill 96 requires court actions by moral persons -- which, in legal terms, means group entities that have rights as a person would -- to file certified French translations of documents from English proceedings. Otherwise, the documents may not be filed at all.

They must also pay the costs of these certified translations, by accredited translators, which are generally steep as well as taking significant time to organize.

Some of the cases that could be affected wouldn't just involve groups, but could involve both a corporation and an individual -- for example, if a charity together with a person with a disability challenge a law, or if a teacher along with a school board sue the government.

The lawyers are trying to have the provision suspended before all of those details become clear.

Bill 96 passed in the legislature in late May, it received royal assent on June 1, and this particular provision is slated to come into effect on Sept. 1, the lawyers said.

The group is asking the court to suspend the application of the provision before it comes into effect.

There are six lawyers who put their names to the challenge, as well as a numbered corporation. The lawyers are Doug Mitchell, Michael Shortt, Souhila Baba, Shannon Snow, Frédérique Lissoir and Sternthal.

"We agree that the French language must be protected because it is part of the cultural identity of the Quebec people," wrote Félix-Antoine Doyon, a seventh lawyer who spoke to CTV News on behalf of the group.

"However, certain provisions of Bill 96 interfere with the rights of the official language minority in Quebec," he said.

"Our positon is based on the right of access to justice and on the Canadian Constitutuon, a document whose fundamental principles include the protection of minorities."

The legal challenge, which was served to the government on Wednesday, outlines how Canadian courts have upheld the right to a bilingual justice system, most notably in two Supreme Court cases, generally known as Blaikie 1 and Blaikie 2.

"Access to justice in French or in English constitutes a foundation stone of Quebec's justice system," they began, in French, in the legal filing.

They wrote that the translation requirement will create costs that are "disproportionate" to the cases being disputed.

"The 'choice' to take legal action in English, therefore, becomes an illusion," they wrote.

The lawyers involved are not affiliated with a second coalition that constitutional lawyer Julius Grey said will also be launching a more expansive challenge down the road.

They're representing only themselves as plaintiffs, though the action is also on behalf of the rights of all clients and anyone who wants to access justice in English, they said. There's a longer tradition in Quebec of lawyers stepping forward to do so, they explained.

In the 1970s, a trio challenged Bill 101, including Peter Blaikie, whose name appeared on both those key Supreme Court decisions.

"They consciously chose to have three plaintiffs who represented what they saw as the major groups in Quebec society at the time," the new coalition said.

Society "is indisputably far more complex now, so the demographics of our challenge are broader," they said.

Bill 96's provisions do also affect them as lawyers since individual lawyers now must work in French on the affected cases or get certified translations, which isn't always feasible, they said.

Translation costs can be hard to summarize, but they're frequently around 20 cents per word, which can easily add up to hundreds or thousands of dollars for a multi-page document.

Earlier this month, the ruling CAQ party said it was no longer updating the English version of its website, even in election season, because it was "too expensive."

The first legal challenge against Bill 96 to be filed was one by the English Montreal School Board.

A gay man is taking the federal government to court, challenging the constitutionality of a policy restricting gay and bisexual men from donating to sperm banks in Canada, CTV News has learned.

Australia is removing monarchy from its bank notes

Australia is removing the monarchy from its bank notes. The nation's new $5 bill will feature an Indigenous design rather than an image of King Charles III. But the king is still expected to appear on coins that currently bear the image of the late Queen Elizabeth II.

The organization regulating medical care and services in Manitoba is apologizing for racism directed towards Indigenous people when accessing health care in the province.