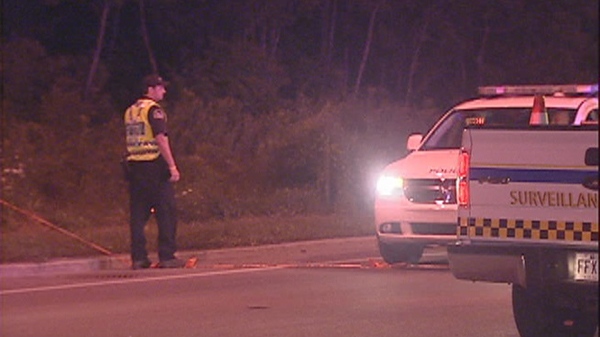 A police officer examines the scene where a motorcycle rider crashed Wednesday night in Terrebonne, north of Montreal (August 17, 2011)

For the third time this week, a motorcycle rider has died after a crash in the Montreal area.

Shortly before 10 p.m. Wednesday night a 33-year-old man riding on Montee Gagnon in Terrebonne sped up to pass a car, then lost control, went off the road and crashed into a Hydro Quebec pole.

He was taken to Cite de la Sante hospital in Laval but did not survive his injuries.

An off-duty police officer lost his life when a car made a left-hand turn into his path on St. Joseph Blvd.

That same day a paramedic was riding on Iberville St. when a firetruck ran a red light and the motorcyclist could not avoid hitting the side of the truck.