More than half of Canadians are ignoring public health advice and visiting family for Thanksgiving: survey 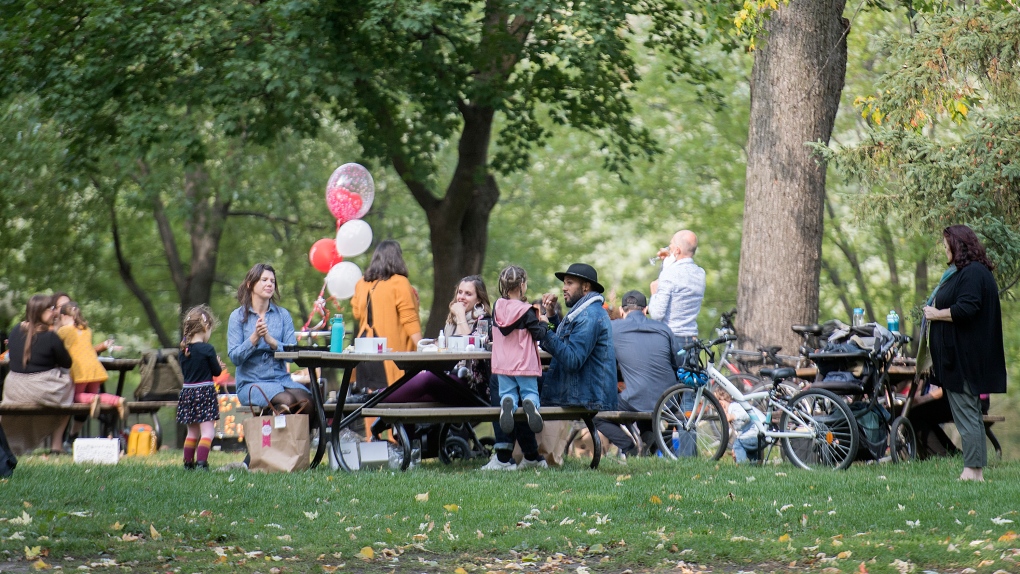 People gather in a city park in Montreal, Saturday, Oct. 10, 2020, as the COVID-19 pandemic continues in Canada and around the world. THE CANADIAN PRESS/Graham Hughes

MONTREAL -- Though COVID-19 cases continue to rise across the country, more than half of Canadians surveyed recently said they would not be staying home for Thanksgiving and would instead be visiting friends and family.

The Association of Canadian Studies (ACS) study found a stark difference in attitude this week from feelings in the spring.

When the ACS surveyed Canadians during the Easter holiday (Apr. 10-12), just 12 per cent said they had gotten together with family.

The survey conducted Oct. 2-4, however, showed 54 per cent saying they had bucked isolation and visited with loved ones.

"My sense is they don't feel they're ignoring it. They're just not following it to the letter," said ACS president Jack Jedwab. "They've determined that they'll comply, but they're just going to make some exceptions, which is not complying."

Half of Quebecers and Ontarians reached said they would visit family and friends, which was the lowest rate in Canada, while those in Manitoba and Saskatchewan (64 per cent) and Alberta (66 per cent) were the highest.

The survey broke the data down by political leanings on both sides of the border as well, which showed that 61 per cent of American Republicans and 44 per cent of Democrats said they had visited family and friends outside of the person's home.

In Canada, Canadian Liberals (54 per cent) and Conservatives (56 per cent) were much closer when answering yes to the same question.

"The steep rise in cases over the last week is troubling," reads a Public Heath Agency of Canada news release. "It also coincides with Thanksgiving planning for many Canadians, which is very different this year. The table will be smaller, and we will be missing those who are not in attendance. What is usually a special tradition for many Canadians, will serve as a hard reminder of how much we are sacrificing to protect ourselves, those we love and our communities."

Jedwab attributes the change in attitude from Easter to Thanksgiving to less strict and clear regulations and a growing pandemic fatigue.

"Lockdown and restrictions make for rarely encountered emotional and psychological challenges," he said. "With phased-in lockdowns the rules seemed clearer or at least fairly unambiguous to many people, but some of the pandemic fatigue is inevitably caused by confusing public health messaging and personal/individual decisions to interpret messages in our own manner."