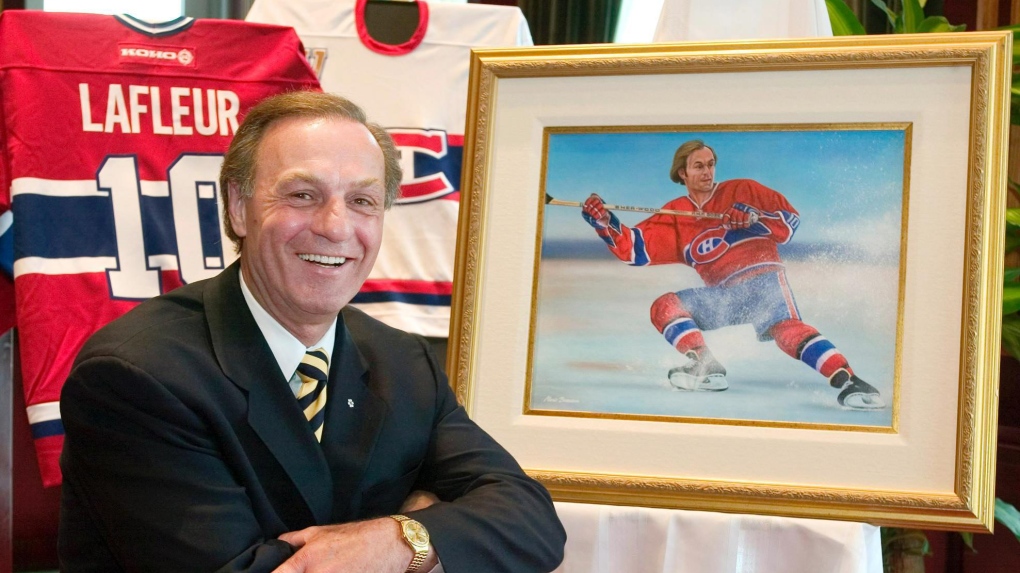 Guy Lafleur poses next to a painting of himself playing hockey by artist Mario Beaudoin on May 18, 2004, in Montreal. -- FILE PHOTO (THE CANADIAN PRESS/Paul Chiasson)

The Montreal Alouettes will honour Guy Lafleur and their own 2002 Grey Cup winning team on July 14, during the football game against the Edmonton Elks in Montreal.

Before the game, the Montreal Alouettes will also pay tribute to Guy Lafleur's legendary hockey career. His son Martin Lafleur will make an appearance, while the Alouettes will unveil a banner representing the symbolic number 10, meant to be immortalized for the season.

"It will be a special day to pay tribute to Guy Lafleur, who was one of Quebec's greatest athletes," said Mario Cecchini, president of the Montreal Alouettes.

As the Alouettes' victory nears its 20th anniversary, the Grey Cup trophy will be presented at the pre-match party. The 2002 winning team itself will also introduce itself to the football fans, at halftime.

"[That win] was important for the city and was celebrated by so many Montrealers. To this day, the players involved always speak so highly of the parade that followed the championship," said Francis Dupont, a spokesperson for the Alouettes. "On Thursday, we will all have an opportunity to celebrate that accomplishment once more."

The first 2,000 spectators to attend the game will receive an Alouettes team picture from 2002 as a souvenir from the era.

The CFL match against the Edmonton Elks — the same team the Alouettes defeated in the 90th Grey Cup — is scheduled to begin at 7:30 p.m. this Thursday.

Russia prepares to annex occupied areas of Ukraine despite outcry

Russia is poised to formally annex areas of Ukraine where it has military control after referendums there reportedly endorsed Moscow's rule.

Federal authorities are set to close Canada's borders Wednesday to commercial dogs, including ones being put up for sale or adoption, from more than 100 countries deemed to be at high risk for canine rabies.

Researchers in the U.K. say they've found DNA in sediments near artificial islands in Scotland and Ireland that date back to 4,000 BC, suggesting that these structures were once used by the elites in ancient times.