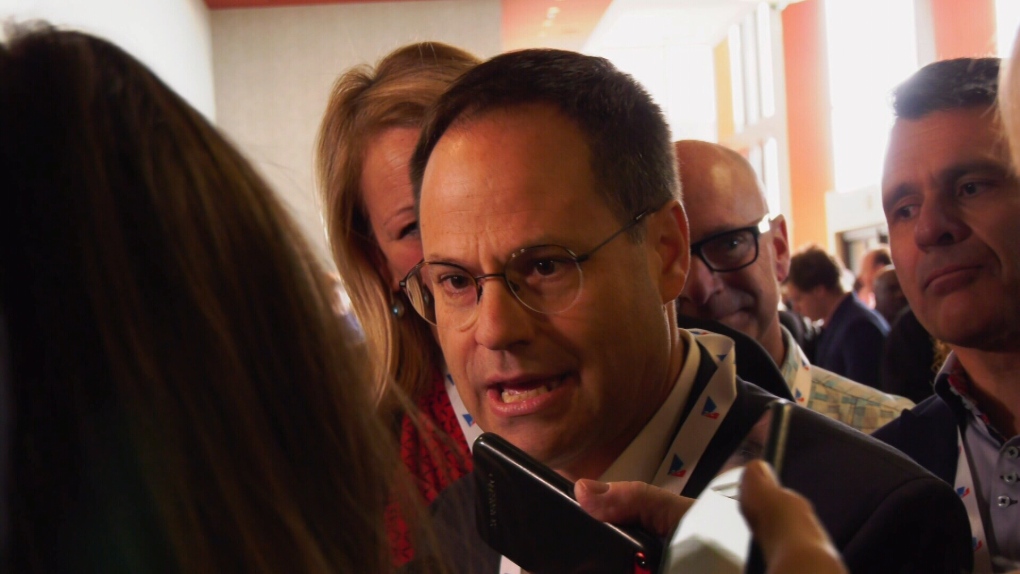 MONTREAL -- The leadership races for two of the Quebec’s oldest political parties have nearly ground to halt because of the CCOVID-19 pandemic.

Alexandre Cusson, one of two candidates vying for the Quebec Liberal Party leadership, wants his party’s campaign suspended. He issued a statement Thursday saying it would be “irresponsible” to continue the race at this point.

“In my opinion it would be counter-productive, if the crisis continues after May 31, to change (Interim Party Leader) Pierre Arcand as leader,” said Cusson, the former mayor of Drummondville and former head of the Union des Municipalites du Quebec.

The party canceled plans to hold a leadership selection conference in Quebec City May 30 and May 31, with current plans to simply announce the results of voting by phone and online at that time instead.

“Arcand is doing an extraordinary job in dealing with the government (on Covid-19) and it would be improper for all Quebecers if we changed that role purely for partisan reasons,” Cusson said in a statement.

Cusson said party members have other things on their minds right now besides choosing the next leader.

His only rival for the leadership, Montreal MNA Dominique Anglade, says her campaign has adapted to the pandemic by suspending its public activities but is continuing online only. The party has shown it can hold leadership debates broadcast online and the leadership selection process will be by phone and online.

“We must show our resilience and remind people that even during the crisis we are at the service of Quebecers,” Anglade says in a statement.

Liberal MNA and party director-general Veronique Tremblay tweeted Thursday that the party’s executive will meet “very soon” to decide about the timing of the leadership.

Meantime the leadership race for the Parti Quebecois may also be suspended as soon as Friday night. That’s when 40 top officials with the PQ, including riding presidents, will meet via teleconference to decide about modifying the schedule for the party’s leadership race. Right now the party is poised to select a new leader by June 19. There are six candidates in the race and the current deadline to enter the race is April 9th, party spokesperson Lucas Medermach says.

“It’s difficult because some of the candidates have taken leaves of absence from the jobs and they are not being paid so if we postpone for months it would be difficult for them.”

Leadership campaign officials are facing the challenges of persuading party members and raising funds for their campaigns without meeting supporters in person.

Quebec's COVID-19 shutdown is on: Here are the essential businesses and services staying open

How long can coronavirus survive on surfaces?