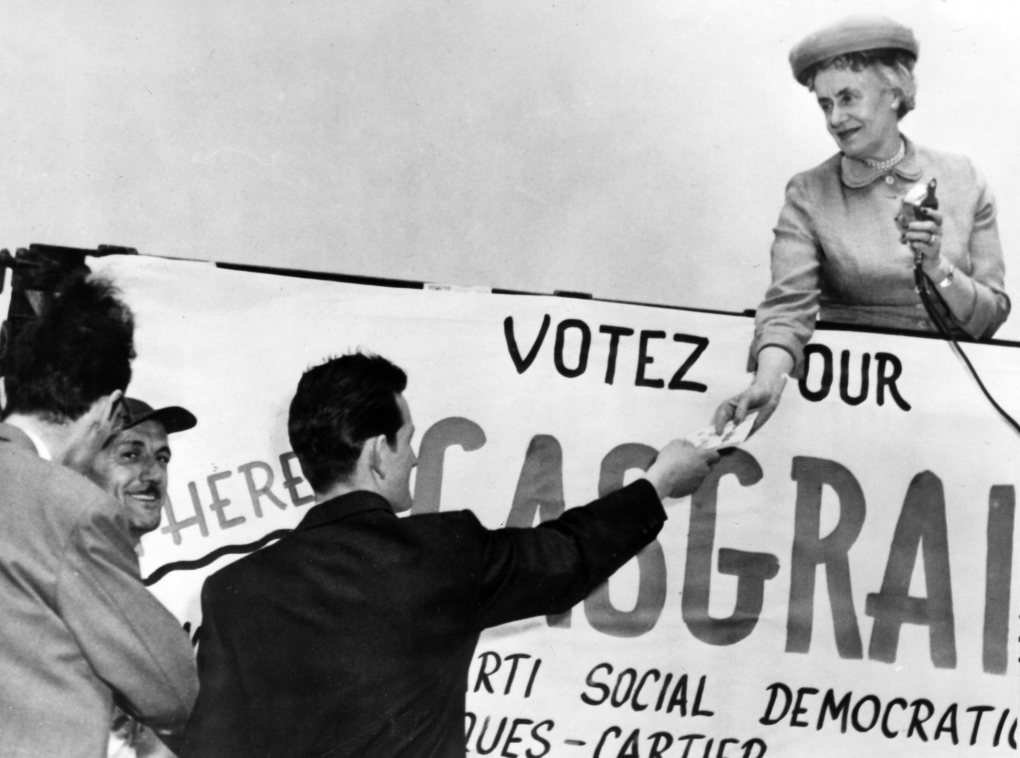 Therese Casgrain, president of the League for Women's Rights in Quebec from 1929 to 1942 is pictured during an election run in this 1967 file photo. (The Canadian Press)

OTTAWA -- The Harper government has spent millions to commemorate the War of 1812 and other episodes from Canadian history, but has also erased at least one inspiring piece of the past.

Therese Casgrain, a feminist icon and Quebec heroine who died in 1981, has been quietly removed from a national honour, to be replaced by an volunteer award bearing the prime minister's banner.

The Therese Casgrain Volunteer Award, was started in 1982 by the Liberal government of Pierre Trudeau.

It honoured Canadian activists such as June Callwood until it was eliminated -- unannounced --by the Harper government in 2010.

An image of Casgrain and her namesake volunteer-award medal also disappeared from Canada's $50 bank note in 2012, replaced by the image of an icebreaker on a new currency series.

An image of the so-called Famous Five women was removed from the same bank note.

"It was a very difficult thing for the family to see the award disappear all of a sudden," Michele Nadeau, Casgrain's granddaughter, said in an interview. "It was a great disappointment."

Human Resources and Skills Development Canada, which had administered the Casgrain award, was instructed in 2010 to create a Prime Minister's Volunteer Award in its place, to be handed out in a ceremony each year presided over by Stephen Harper.

Casgrain fought for the right of Quebec women to vote, which they finally won in 1940. She also became the first female leader of a political party in Canada, heading the CCF in Quebec, and was appointed to the Senate in 1970 by Trudeau.

A spokesman for Employment and Social Development Canada, the successor department to Human Resources, says the Casgrain award was reviewed in 2010 following the fall speech from the throne, which announced plans for a new volunteer award.

"Discussions took place with the Casgrain Foundation and it was decided that Human Resources and Skills Development Canada end the ... program, rather than re-orient and re-launch it," Pierre Nolet said in an email.

"There was no public announcement of its end. The spirit and objectives of the Therese Casgrain Volunteer Award were retained in two national categories of the PMVA (Prime Minister's Volunteer Award)."

Nadeau, however, says her family and the Montreal-based Therese Casgrain Foundation, which she heads, were not consulted about whether the award should be eliminated.

"We were informed of a sort of internal review that was done by the Human Resources Department, and they decided to discontinue. But we were never consulted."

"Basically, we were advised that at some point the award would be discontinued. ... Members of the family, the grandchildren, etc., the great grandchildren, were rather upset."

The Prime Minister's Volunteer Awards, launched in 2011, honour 17 Canadians from across the country each year. The awards ceremony was held Feb. 27 this year in Toronto, with Harper personally presenting a medal and certificate to each winner, and having his picture taken with them.

The Casgrain Award was killed once before by the Progressive Conservative government of Brian Mulroney in 1990, but was revived in 2001 by the Chretien Liberals.

Two members of the Therese Casgrain Foundation sat on the selection committee for the two volunteer awards handed out each year, but Human Resources handled all the administration. Much the same group of public servants now administers the new prime minister's award.

The department gave the Casgrain family two commemorative packages about the Casgrain award and its 31 recipients after the demise, including a book and a copy of the medal.

A $51,000 focus-group study commissioned by the federal government in late 2010 found strong resistance to naming a volunteer award after the prime minister.

"They (participants) were uncomfortable with the notion that through the reference to 'Prime Minister' there was the possibility that the awards might be perceived to be political in nature," said the Harris-Decima report.

Another volunteer award begun in 1995, the Caring Canadian Award, is handed out by the Governor General each year.

Other elements of Canada's past have gone uncommemorated in recent years, notably the 25th and 30th anniversaries of the Charter of Rights and Freedoms, signed into law in 1982 under Pierre Trudeau.

In 2012, Harper suggested "divisions" around the patriation of the Constitution kept the government from commemorating the 30th anniversary, a reference to the fact Quebec did not sign the deal.