Francoise Abanda shows promise in Miami but only Bouchard remains 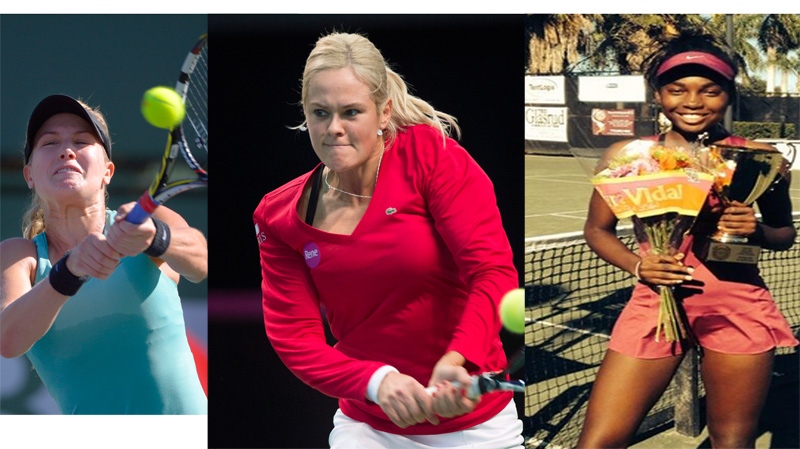 Seventeen-year-old Francoise Abanda continued to show that she can play with the pros, as she briefly joined fellow Montrealers Eugenie Bouchard and Aleksandra Wozniak in the main draw of the Women's Singles section of the Sony Open in Miami by winning her qualifying match against Anabel Medina Garrigues of Spain, 3-6, 6-1, 6-2.

But in spite of the presence of the three promising Montreal female tennis stars at the Miami tournament, soon only Bouchard remained.

Abanda was unable to duplicate her qualifying success in her next match against Japanese veteran Kimiko Date, going down 6-7, 6-4, 4-6 Tuesday.

In beating Medina Garrigues, Abanda hit three aces against only one double fault and was broken four times, while breaking her opponent seven times. Abanda won 59 percent of all points in the 100-minute match.

Meanwhile Westmount’s rising tennis star Eugenie Bouchard has her eyes set on going deep into the tournament, as she plays her first match against 42-ranked Elina Svitolina, a Ukrainian opponent she has had trouble with in the past.

The 19th-ranked Bouchard, who most recently bowed out in the third round at Indian Wells after making the semifinals at the Australian Open, is hoping to get her game into gear for the upcoming Slams in Paris, London and New York.

Aleksandra Wozniak received a pass into the main draw but was defeated by 74-ranked Caroline Garcia, of France in straight sets Tuesday.

Garcia also beat Wozniak in their only head-to-head matchup at the Bell Challenge in 2013.

Wozniak, ranked 173, has shown some promise since her rehabilitation from long term injury, also winning a couple of matches at Indian Wells.