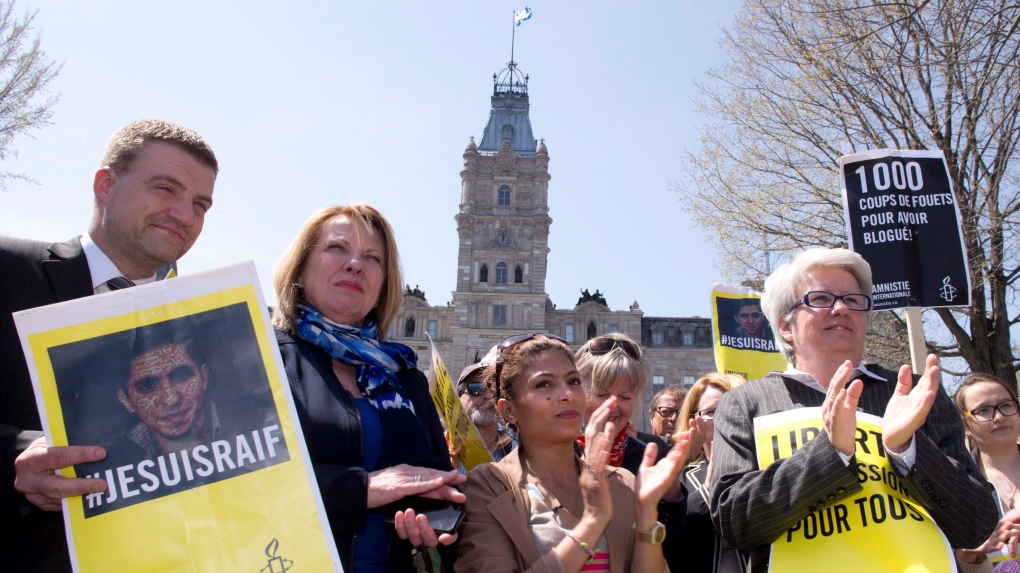 OTTAWA -- Ensaf Haidar, the wife of Raif Badawi, is seeking to run for office in the next federal election, and she has chosen the Bloc Quebecois as her political vehicle.

She has lived in Sherbrooke since taking refuge in Canada with her three children, and will first have to earn her place at a nomination assembly.

The defeated Bloc candidate from 2019, Claude Forgues, has already expressed his interest in trying his luck again.

Ms. Haidar has garnered some support in the sovereignist movement in Sherbrooke and the Bloc member for the region welcomed her entry into political life.

Haider explained why she wants to be a Bloc candidate in an interview this week and, if supporters then the voters choose her, a member of Parliament in Ottawa.

"I love Quebec," she said. "Quebec has helped me a lot. It supported me a lot."

For years, vigils have been held every Friday in Sherbrooke to demand the release of her spouse.

Raif Badawi has been in prison for nine years. The Saudi authorities blame him for his writings which advocated liberal values.

Sherbrooke residents' rapid run to support her cause won over Ms. Haidar.

"I feel like I am among my people here. And I want to serve the region," she said.

She expressed her gratitude to the Bloc Quebecois which, until recently, initiated the unanimous adoption in the Commons of a motion demanding that the government offer Canadian citizenship to Raif Badawi.

"I see Quebec as a country because when I went out, when I travelled to Ottawa or Ontario, I found it was like leaving the country," she said. "Quebec is big enough to be a country. It has its culture. It has its mother tongue."

If she were to find herself on the opposition benches in Ottawa, she doesn't believe it would hinder her efforts for her husband, "on the contrary."

She believes that she could thus fight "directly" and "harder" for "the freedom of Raif," and for all "prisoners of conscience" in Saudi Arabia or elsewhere.

She also wants to talk about secularism.

Last November, at the court challenge to the Quebec law on state secularism (Bill-21), Ms. Haidar spoke as a witness by the Mouvement laique quebecois.

The lawyer who presented the group's arguments offered his support to Ms. Haidar. It must be said that in 2018, when Guillaume Rousseau ran for PQ candidate in Sherbrooke, Ms. Haidar, in a first partisan political outing, endorsed him.

"Since she comes from abroad, it is also good proof that the Bloc is able to seek out Quebecers from everywhere, of different origins," said Rousseau, in a telephone interview.

Without endorsing the nomination contestant, because it is "a little too early," Shefford Bloc MP Andreanne Larouche, Bloc made a similar speech.

"It's really interesting to see that Ms. Haidar recognized herself (in) the Bloc Quebecois," he said on Thursday.

Ms. Haidar's French is somewhat laborious. Asked to explain, in Arabic, how she will be able to get by in a place of debate, between parliamentarians, she said she had no fear.

"When people talk to me, I understand everything," she said.

She said she will rely on the fact that elected officials prepare their speeches in advance.

"For sure that's how it will be for me; I'm not going to talk without preparation," she said.

According to Larouche, the quality of Ms. Haidar's French will not be "taken into consideration" by the voters of Sherbrooke.

"She is ours. Whether or not she speaks French well, people recognize themselves in her, they have adopted her," said Etienne-Alexis Boucher, PQ MNA from 2008 to 2012.

There is no guarantee that Ms. Haidar will wear the Bloc colours in the next election campaign.

Forgues, who came third in the 2019 election, within 2,020 votes of Liberal winner Elisabeth Briere, wants to go for it once again.

When contacted by The Canadian Press on Thursday, he seemed determined and still believed he was alone on the track.

A nomination election - likely virtually due to the COVID-19 pandemic - if the party authorities give the green light to Ms. Haidar and Forgues.