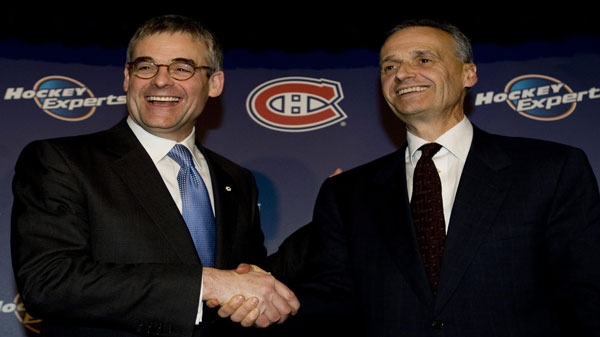 Montreal Canadiens' president Pierre Boivin, left, congratulates Pierre Gauthier on his appointment as general manager of the Canadiens at a news conference in Montreal, Monday, Feb. 8, 2010. THE CANADIAN PRESS/Graham Hughes

Considering how they've been built, it's pretty difficult to contemplate to what degree the Montreal Canadiens work at a major disadvantage come July 1.

In fact, even the signing of Roman Hamrlik four years ago by Bob Gainey was met with such a gasp of horror over the salary by yours truly, I thought Gainey had completely lost his mind.

Except that example is a valuable one to retain on July 1, 2011, because with the benefit of hindsight and evaluating just what Hamrlik delivered over those four years, I would say he earned every penny of that money.

But the more pertinent lesson I gleaned from the Hamrlik signing is that the Canadiens, no matter what, will have to pay unrestricted free agents considerably more than any other team in the NHL.

So while people are sure to judge the four-year, $18 million contract Gauthier gave to Erik Cole and the two-year, $2.3 million deal given to Peter Budaj as being far too much money for those players, I think a bit of perspective is required.

First of all, for a general manager who has a reputation for being too passive, Gauthier went out and got the player he wanted quite aggressively.

Gauthier said a call was placed to Cole's camp right at noon when he was asked where the power winger placed on his list, and Cole later said the fact the Canadiens expressed their interest so early had an impact on him. I already spelled out why Gauthier should have targeted Cole here on Wednesday night, so suffice it to say I agree with his agenda.

Then, once that interest was expressed, Gauthier gave Cole an offer he couldn't refuse: a four-year term for a 32-year-old, a $4.5 million annual salary, and a no-trade clause.

For his part, Cole said originally the discussion was about a three-year deal, and that the no-trade clause was a "pleasant surprise" because he thought it was something "that teams were not that into anymore."

So clearly, Cole's agent Steve Bartlett did a fine job.

"When he (Bartlett) told us what the term was, what the contract was – it started out as a three-year deal – to what it progressed to I couldn't be happier," Cole said. "I couldn't be any prouder, I couldn't be any more thankful and I'll do everything to play as hard as I can and to be as good a Montreal Canadien as I can be to make the ownership proud and to make the fans proud that I'm there."

Cole said he simply indicated to his agent to go out and get the best deal possible with the Canadiens, because of how early they expressed their interest, but also because he grew up loving the team and he absolutely adores the hockey culture in Montreal.

Bartlett did that, because he obviously knows that there are more practical factors in play that make Montreal a less desirable landing point for his client – namely, taxes.

Montreal, at least according to this chart published in La Presse on April 8, is the most punitive team in the NHL when it comes to income taxes.

As an example, using that chart as a guide, the six-year, $33 million contract James Wisniewski signed with the Columbus Blue Jackets on Friday – which, by the way, means there is a fifth round pick coming to the Canadiens instead of a seventh rounder for trading his rights – gives The Wiz an extra $434,500 in take home pay per year compared to signing the same contract with Montreal.

Over the six-year term of the deal, that amounts to an extra $2.607 million in Wisniewski's pocket by signing that deal in Columbus rather than in Montreal. In fact, if the Canadiens wanted to come close to matching Wisniewski's $3.28 million take home pay with Columbus, they would have had to offer him $6.3 million per year.

When it comes to Cole, he mentioned that the Capitals, Bruins, Sabres, Flyers and obviously the Hurricanes had varying degrees of interest in his services Friday. Again, using this La Presse chart, Cole's annual average take home pay for the Canadiens will be roughly $2.3 million.

So two of those teams would have provided Cole with a better net income than the Canadiens with an offer that was $500,000 lower, and the other three would have come within $60,000 of matching it. If that doesn't illustrate the degree of disadvantage the Canadiens are working under, I'm not sure what will.

More than money at play

But aside from money, there were obviously other factors in play with Cole.

First off, he grew up watching the Canadiens as a kid in Oswego, N.Y., and spoke in absolutely glowing terms about the Bell Centre and the general "aura" of the city when it comes to hockey. He's never produced at a rate as prolific as his 14 goals and 11 assists in 28 career games against Montreal, and Cole credited the energy he gets from playing at Bell Centre with a good deal of that bump in performance.

But Cole's most telling words on his feelings about the Canadiens came when he was asked about leaving the Hurricanes, an organization that was believed to be a key to his success after a brief sojourn with Edmonton proved horribly unproductive and ultimately led to his re-acquisition by Carolina.

"A lot of people may view my situation and say that he's won a Cup and he likes it in Carolina," Cole said, before embarking on a long ramble.

"Those things are true, but I want to win and I want to be a part of things. When we won a Stanley Cup in 2006 I only played two games in the Cup run (Cole played in Games 6 and 7 of the Cup final after recovering from a broken vertebra in neck). In my rookie year I went to the finals, and I know how hard it is and how much you sacrifice and how much your body hurts and how lucky you have to get as a group, how many breaks you have to have go your way. I wasn't really a part of it in '06. If I didn't play in any (playoff) games, I was debating whether I would even touch the Cup. So I want to be in the playoffs every year. I want to have an opportunity to play with good players, to be effective and try and be a difference-maker in the playoffs when it's crunch time.

"There were a few teams today there was some interest from who were similar in those characteristics. But when you look at the Carolina organization, with the players they were re-signing, the self-inflicted budget that they have in terms of where their spending is, they do have some really good young players and a great group of guys and a great coaching staff and I do believe it's a very good organization.

"But I think in some ways I didn't want to be effective when there's a chance of us maybe getting into the playoffs this year or maybe not, and when I'm less effective and playing a lesser role, the team's in the playoffs and is capable of contending for a Stanley Cup in future years. I wanted to do it now, when I'm a bit younger and I feel like I have real good years to be effective."

That last line, about wanting to do it now, is a telling sign to me.

I'm sure Cole would not have come to Montreal if the money wasn't there. There's no doubt on that, and it's possible that was ultimately the primary factor in his decision.

But the fact the Canadiens met this criteria for him, the one about winning now, when teams like the Capitals, Flyers and Bruins were all in the mix, should say something about the team that's growing before our eyes. One with a veteran core that is not overly aged, one with key players like Tomas Plekanec, Michael Cammalleri and Josh Gorges who are hitting their prime, one with a number one goalie, a stellar defenceman and an equally promising forward who are nowhere near their prime, and one that is becoming more of a team as it enters Season Three since the great summer re-build of 2009.

Perhaps this group that is so susceptible to criticism from those who follow it isn't so bad after all?

With the addition of Cole, that becomes a far easier assertion to make.