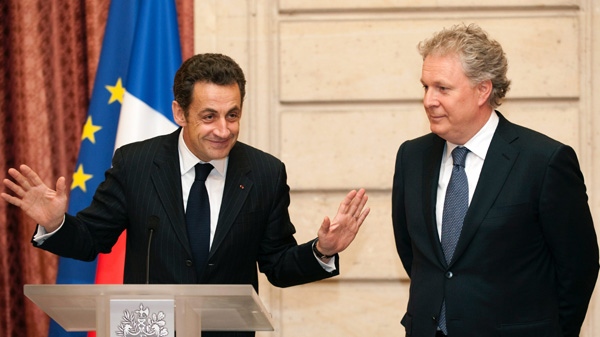 PARIS - Quebec Premier Jean Charest has arrived in Paris after surviving a vote of non-confidence in the national assembly.

He was greeted at the Roissy Charles de Gaulle Airport with honours accorded to a head of state.

Charest will meet Thursday with President Nicolas Sarkozy at the Elysee Palace and with Prime Minister Francois Fillon.

The trip is part of an alternating series of visits between French and Quebec premiers established in 1977.

On Wednesday, Charest was saved by a united caucus as it banded together to defeat a Parti Quebecois non-confidence motion by a vote of 61-57.

The vote was expected to be so tight that Charest delayed his Paris trip to avoid the possibility of losing his majority government only two years into its mandate.

Marois continues to press for inquiry

PQ Leader Pauline Marois did not mince words on Wednesday in the aftermath of defeat.

"This is a dark day in the history of Quebec," she told reporters.

"This is the worst premier we've had in 30 years."

Charest has steadfastly refused to call a public inquiry into the numerous corruption scandals rocking the province.

The PQ had hoped to force a policy shift. It calculated that if a few Liberals threatened to rebel before Wednesday's vote, the premier would have no choice but to change course.

Marois urged Quebecers not to lose hope for an inquiry. She promised to hold one if elected premier, saying she would serve as the "spokeswoman for the citizens of Quebec" who demanded a probe.

But during Wednesday's debate, Charest vigorously defended his refusal to call one.

He stared into the legislature's TV cameras and -- speaking past his opposition -- issued a direct appeal to Quebecers where he asked for their trust.

"My government takes these reports (of corruption) very seriously," Charest said. "I say without equivocation that all forms of corruption and collusion are unacceptable."

That's why, he said, his government had assigned 500 people to fight corruption through police investigations and through legislation that oversees the construction industry and tightens tendering rules.

Charest asked voters to ask themselves the following: Is it politicians' job to uncover cases of corruption -- or is their job to legislate solutions while police work on criminal cases?

"Can we, as legislators, take decisions to change things? The answer is yes," he said.

The premier also described public inquiries as counter-productive, saying they granted parliamentary immunity to criminals while giving them time to prepare their stories in advance.

Other Liberals also called into question the usefulness of past inquiries, like the Gomery one on the sponsorship scandal.

"Everyone is sheltered in a public inquiry," Charest said.

"Nobody is sheltered from a police investigation."

Toward the end of his speech Wednesday, Charest turned his guns on his opposition.

He accused it of ignoring people's priorities and, while focusing on scandal every day, of having no program for things like the economy and regional development.

He said his opponents' true motivation is triggering a political crisis that could bring them closer to their dream: holding a referendum on Quebec independence.

Some of that outrage is being expressed online with a petition introduced by Quebec Solidaire's Amir Khadir.

The petition, which demands Charest step down because of his refusal to hold an inquiry into allegations of corruption, garnered tens of thousands of 'signatures' in a matter of hours.

More than 230,000 people have now 'signed' the petition, making it the most popular ever hosted by the National Assembly.

The petition process itself has come under fire from critics, who point out that it requires nothing except a valid email address, and that nothing prevents people from 'signing' the official National Assembly petition with false names, false towns, or casting multiple votes.

The number of valid signatories is expected to drop when a team of bureaucrats validates names on the petition, a process that will not occur for some months.

For weeks the Liberal government has refused daily calls for an inquiry that would study alleged connections between party financing, government infrastructure contracts, and organized crime.

Charest has always insisted that the Surete du Quebec investigation, Operation Hammer, should be left alone to do its work.

Now Liberal ministers have been hinting that Operation Hammer, which has conducted several raids and executed multiple search warrants since it was formed, is ready to make arrests.

Prosecutor Louis Dionne says people will be arrested and charged before the end of the year.