Quebec’s bills 21 and 96 “disproportionately” impact Montrealers, and the city ought to have a party represent it in the provincial legislature.

That’s according to Bloc Montreal leader Balarama Holness who, one year after his attempt to be Montreal’s mayor, has set his sights on Quebec City.

“We need a party that has a strong voice at the National Assembly that represents the interest of Montrealers, because right now, there’s a void in that regard,” said Holness during a Friday interview with CTV Montreal anchor Maya Johnson.

He says two of the most controversial laws in Quebec – bills 96 and 21 – disproportionately affect the metropolis, which has large religious and language minority populations.

Bill 96 introduced an overhaul to Quebec’s French Language Charter, with implications across several sectors favouring the French language. Supporters of the bill say it’s a necessary step to protect the language, while others say it’s too strict on immigrants and students wishing to study in English, among other complaints.

The bill has become a hot-button issue for candidates ahead of the Oct. 3 election, who have divided opinions on the CAQ’s bill, whether that be because they support the law, believe it goes too far, or think it doesn’t go far enough.

Holness’s Bloc Montreal is vehemently opposed to Bill 96, and says the party is putting its resources into ridings with large English-speaking populations.

If elected, he says that his party wants to reserve 20 per cent of provincial taxes for use in Montreal.

"We would be able to use those funds to invest in our communities, help small businesses," he told CTV. 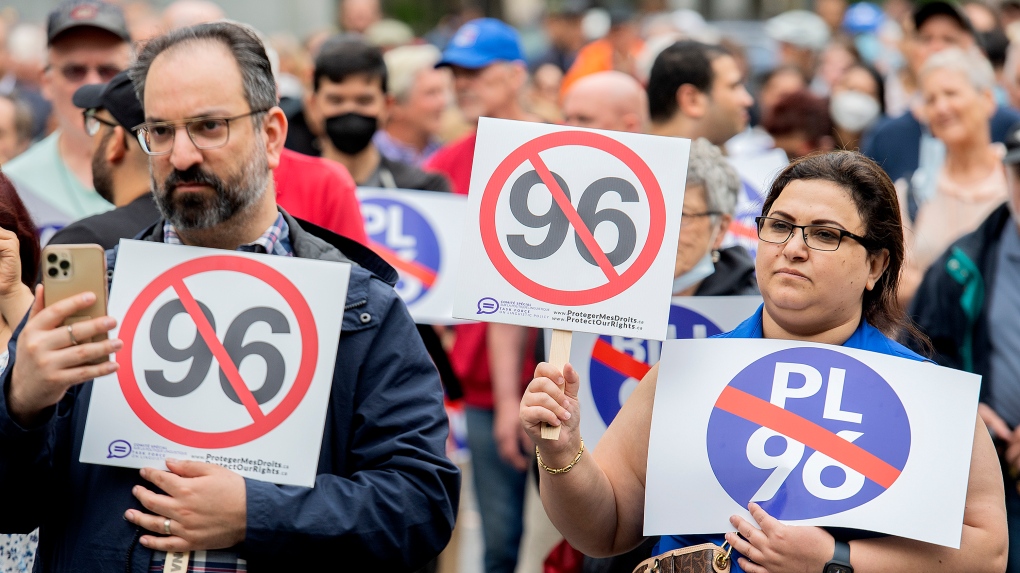 People take part in a protest against Bill 96 in Montreal, Thursday, May 26, 2022. The language law reform, known as Bill 96, forbids provincial government agencies, municipalities and municipal bodies from making systematic use of languages other than French. THE CANADIAN PRESS/Graham Hughes

He also said the city deserves special attention from Quebec City regarding restrictions on religious symbols created through Bill 21.

That bill prohibits Quebecers working in certain positions of authority – such as police officers and teachers – from wearing religious garments while at work.

Supporters say Bill 21 is a safeguard for secularism in a province long influenced by Catholicism, while critics say it simply forces religious peoples – especially Muslim and Jewish people, whose religious garments are more easily seen – out of work.

“This legislation disproportionality impacts Montrealers,” said Holness, especially “Muslim women, who are higher in population here in Montreal as opposed to the regions.”

Bloc Montreal, which was founded just months ago, remains an underdog party. Holness was not invited to participate in this week's "Face-a-Face" debate with heads of the major parties, but says he's still looking for gains this Oct. 3, not to mention the elections to come.

It’s not unlike Holness to advocate for Montreal’s English presence provincially, even if it might cost him votes among supporters of Bill 96, and the push to preserve French.

During his bid for mayor, Holness wanted to establish Montreal as a bilingual city-state, and later pledged to hold a local referendum on the place of English in the city. However, he also said the party would not move to change the municipal charter, which defines Montreal as a French City.

But courting Montreal’s English vote requires its severance from the Liberals, which have long been considered advocates for that population.

This year, though, he’s just one of three so-called alternatives to the Liberals. There’s the Canadian Party, led by Colin Standish, and the Quebec Conservative Party, which has gained significant support during the campaign under the leadership of Eric Duhaime.

Holness acknowledged his party is still small, but said he’s playing the long game, especially when it comes to chipping away at Liberal support.

“The Liberals have been in business for 150 years, we’ve been here for 150 days,” he said. “Nobody expects us to be polling at the same standard as these parties.”

“We are planting the seed now, and this party will survive me.”

Protests in Iran continue despite internet blackouts; Canadians respond with rallies of support

Nearly two months after the protests were first ignited, the people of Iran continue to march in the streets, despite increasing violence, internet blackouts and arrests, while Canadians support them overseas, organizing rallies in response.

Prime Minister Justin Trudeau visited Monday the graves of victims of a deadly stabbing rampage at a Saskatchewan First Nation before he was to meet with family members in private.