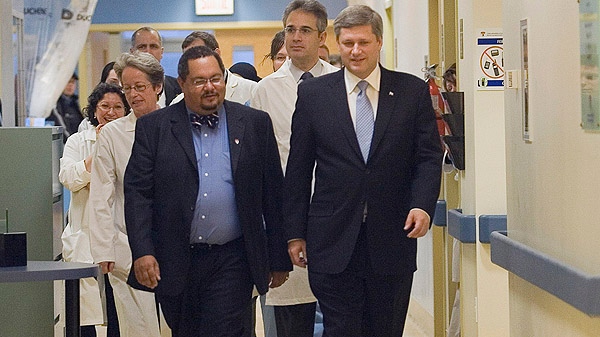 The man best known to Montrealers as the CEO of the McGill University Health Centre, and the man in charge of constructing the English superhospital, has stepped down from his post with CSIS.

Dr. Arthur Porter was the civilian chief of the Security Intelligence Review Committee, and late Thursday Prime Minister Stephen Harper said he had accepted his resignation.

The former head of Canada's spy watchdog painted himself as a man of integrity even as he quit amid concerns about his business dealings.

Earlier this week the National Post newspaper reported that Porter had forged a business arrangement with a notorious international lobbyist.

The article revealed Porter, a native of Sierra Leone, once struck a deal with middleman Ari Ben-Menashe on a $120-million aid-for-development initiative from Russia. It would have given African Infrastructure Group, a firm owned by Dr. Porter and his family, the chance to manage infrastructure projects in his homeland.

Ben-Menashe is a controversial figure who claims involvement with the Israeli government. His Montreal consultancy has done work for notorious Zimbabwean leader Robert Mugabe.

Porter is still in charge of the MUHC.

The Conservatives appointed Porter to the review committee, which keeps an eye on the Canadian Security Intelligence Service, three years ago. He became chairman last year.

In a letter to Harper, Porter said the initial Post article and subsequent coverage "raised the spectre of conflict of interest and questioned my good judgement due to past dealings with an individual, who was presented to me as being potentially able to secure funds for infrastructure projects in Sierra Leone.

"I was very disappointed with the scurrilous portrayal. I am a proud Canadian and man for whom integrity, honour and respect hold tremendous meaning."

Porter said it was with these values and "a strong sense of civic duty in mind" that he accepted the federal appointment to the review committee.

"I wish to state for the record that I have fulfilled with diligence my mandate."

The devastating aftermath of civil war in Sierra Leone "naturally motivated me to explore options to help the country to rebuild its infrastructure," he wrote, adding, "I haven't let other business interests interfere" with review committee responsibilities.

But Porter said he was aware "that the media portrayal has the potential to tarnish the SIRC's credibility," leading him to tender his resignation.

"I feel strongly that even the hint of doubt could impede the SIRC's ability to accomplish its tasks," he said.

"It is my hope that this gesture will let the agency continue its valuable work on accountability mechanisms and on helping maintain and ensure a strong and secure Canada in these challenging times."

In a statement Thursday, Harper said committee member Carol Skelton will serve as chairwoman until a permanent replacement is appointed.