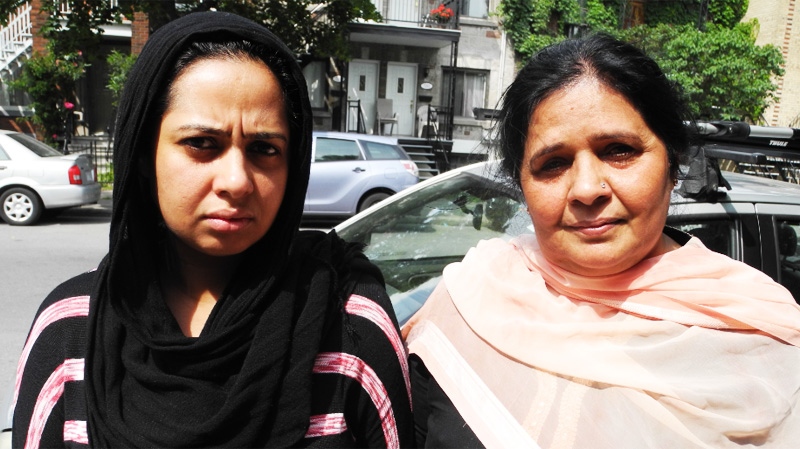 Begum Khurshid Awan, right, is seen in a recent photo posing with her daughter in Montreal. (Photo courtesy: Solidarity Without Borders)

A group of Montreal activists is expressing outrage with the Canada Border Service Agency after the government agency sent case workers to the Montreal General Hospital to visit with a woman who was undergoing medical treatment for a chronic heart condition..

Solidarity Without Borders denounced what they described as the repeated "aggressive, intimidating and excessive behaviour" by federal agents towards Begum Khurshid Awan, a 57-year-old Pakistani national whose asylum request was refused by Canadian authorities and whose departure from Canada appears imminent.

NDP leader Thomas Mulcair and the woman’s cardiologist had convinced the agency to delay the woman’s removal deportation past the Wednesday deadline as she received treatment.

"Three agents present, two in uniform, informed Mrs. Awan that she was under arrest and that she would be under the watch of a CBSA agent in uniform around the clock until her release from the hospital, at which point she would be taken to the detention center in Laval and held until her deportation the next day," Rosalind Wong of the SWB told CTV Montreal.

Stephane Malepart of the CBSA issued a statement to CTV Montreal Friiday but did not discuss details of the case.

"Matters concerning the health and safety of our clients are taken very seriously. At no time will the CBSA interfere with an individual’s health care," he wrote. "In cases where there are health concerns, the CBSA consults with medical professionals and relies on their expertise to determine appropriate action."