MONTREAL -- Montreal police arrested seven people and continue to investigate after rioters smashed windows and set fires in Old Montreal during a large protest that took place in violation of the 8 p.m. curfew on Sunday evening.

A crowd had initially gathered in Place Jacques Cartier, chanting slogans such as "Freedom for the Young."

However, some present began setting fires in garbage cans and smashing windows of nearby storefronts. Riot police soon moved in, firing tear gas.

Small business owners say after everything they’ve been through, this was the last thing they needed. #quebec @CTVMontreal @CTVNews @CTVNationalNews pic.twitter.com/3HlPOP5J2I

"Fatigue linked to our fight against #COVID19 does not in any way justify the destruction of public property and failure to respect the rules. We must remain united and stick together," the mayor said.

She also said businesses were ransacked Sunday night, encouraging residents to visit Old Montreal to support the merchants in the area.

At a news conference on Monday, questions were raised about whether Montreal police were caught off guard by the throng of protesters and the escalation of violence in the Old Port. She defended the police officers who were called to respond, saying they have a difficult job responding to volatile situations.

"Sometimes when the police officers act too fast, it can put oil on the fire, it just fuels up even more so there has to be a balance," she said.

She also had a blunt message to the rioters: "People are allowed to protest, it's their right. Do it right. Don't attack people that are already suffering, that are are dealing with COVID just like they are, those protesters," she said.

"But … their job is now even more in danger because some people decided to break their windows, which is ridiculous, it's stupid."

By 9:45 p.m., the crowd had been mostly dispersed, leaving widespread damage in its wake.

The owner of Notre Dame St.'s Rooney Shop took to his Instagram page to post a picture of his store's smashed window.

"People are mad at the provincial government for their decision to bring back the earlier curfew so they decided to take it out on small businesses," he wrote. "I wonder if this helped."

One shoe-store owner in Old Montreal said the riot took her by complete surprise.

"They damaged some shoes, they stole some things, so I'm looking at at least $10,000 in damage," she told CTV News.

Observing the aftermath of the riot Monday morning, others on the street were also shocked at how the demonstration turned violent.

"I don't really know what to say. It's called civil disobedience, and violence should never be an option," one woman said. 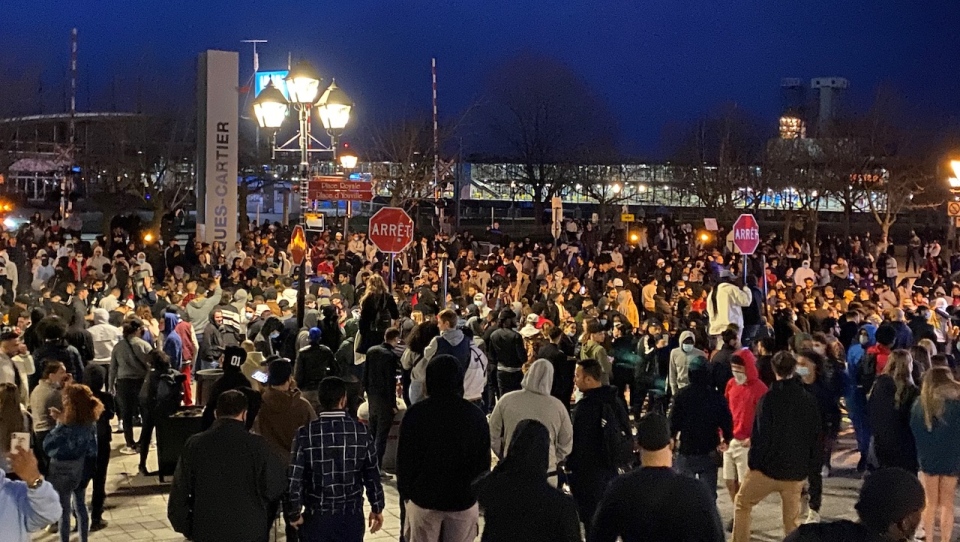 People take part in an anti-curfew protest in Montreal on Sunday April 11, 2021. Hundreds of people gathered in Old Montreal tonight in defiance of a new 8 p.m. curfew. THE CANADIAN PRESS/Giuseppe Valiante

As of Sunday evening, the nightly curfew in Montreal and Laval has been moved back to 8 p.m. rather than 9:30 p.m.

But while Quebec has seen a spike in COVID-19 cases over the past week, with each day seeing at least 1,100 new cases, numbers have been somewhat stable in Montreal.

Montreal's curfew change was announced Thursday by Premier Francois Legault, who said it is a preventive measure in anticipation of an explosion of COVID-19 cases. Quebec City and some other smaller cities have seen dramatically spiraling COVID-19 numbers due to the highly contagious virus' variants.

Doctors have warned that they are also seeing a larger proportion of younger patients being hospitalized due to the virus than during the virus' first two waves.

Hundreds of people breaking first night of 8 p.m. curfew in Old Montreal. « Freedom for the young!» they chant. pic.twitter.com/zdqAjb9MTz

The Old Port gathering came a day after a large protest against public health measures in Quebec's schools, such as mandatory mask-wearing and alternating attendance. Police continue to hand out fines for curfew violations in Montreal, with the police service handing out 538 tickets between April 5 and 11.