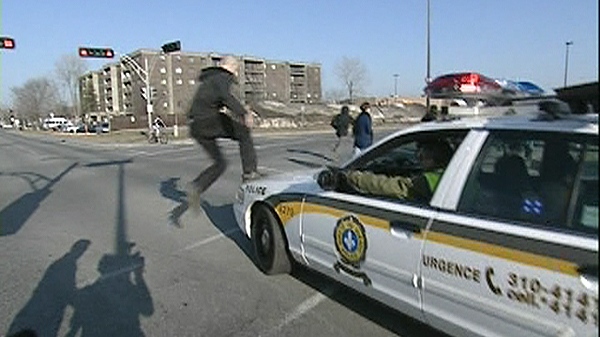 A protester that was blocking the Champlain Bridge tries to run away from police officers (March 20, 2012)

Students protesting against tuition hikes blocked the Montreal-bound lanes of the Champlain Bridge Tuesday morning in a move that will cost them more than next year's planned increase.

Drivers coming in from the South Shore were surprised to find a row of cinder blocks had been placed across the entrance ramp from Route 132 to the Bridge, and a group of about 200 students stretched across Highway 10.

Surete du Quebec officers were on the scene monitoring the situation, but as of 7:45 a.m. had taken no action except to create a blockade of police cars to ensure motorists did not try to get through.

The students held up a banner several metres wide that read "Stop the cuts, give us our dues."

They were also holding a large red square, a symbol of the debt they say they will incur to continue their higher education.

By 8:00 a.m. the lineup of drivers patiently waiting to cross from Route 132 was being diverted to other roads toward Montreal, as were drivers on Highway 10.

Buses coming from the South Shore were able to travel over the Champlain Bridge since they use a counterflow lane on the opposite side of the span.

But the protest ended quickly at 8:20 a.m. when the police intervention squad crossed the Bridge, then drove up to the protesters.

Before officers could even get out of their vehicles, the students walked south, toward the lineup of waiting cars and within five minutes had vacated the highway and started walking through the residential neighbourhood near the Bridge.

Police officers followed the demonstrators as they boarded a pair of yellow school buses and after a short drive the buses were stopped.

Several protesters tried to run away from police, but many, if not all were stopped and forced to produce identification.

The SQ says each protester will face fines of $350 plus $144 in fees for violating the Highway Safety Code. In all, 94 people were given fines of $494, including 18 minors. It took the SQ several hours to identify all the students because many did not carry proper identification and the parents of minors had to be contacted

However the students had left behind the cinder blocks, which had been attached to the pavement with cement.

When the protest ended the officers were quick to remove the blocks since the cement had not had time to set, however it was only after 8:35 a.m. that police let drivers through.

Not the first time

While the protest on the Champlain Bridge was taking place, other protesters unfurled banners on the Jacques Cartier Bridge, and the FEUQ, the Federation etudiante collegiale du Quebec, is planning another protest Tuesday afternoon in Quebec City.

Student protesters have rallied dozens of times this year and this is not even the first time they have blocked a major highway.

Last Wednesday, students marching through Montreal went onto Highway 40 with a police escort for about 20 minutes.

Over the weekend groups of students demonstrated outside a restaurant where Premier Jean Charest was eating dinner with his wife.

On Monday, a sea of students in red shirts held still for 15 minutes in Place des Arts as part of ongoing protest. Earlier in the day, students marched on the office of Quebec's education minister and blocked access to Google's new offices in Montreal. Charest was helping unveil the offices.

A large-scale protest is scheduled to take place this Thursday at Place du Canada, out of fears of violence Concordia University has cancelled all classes for that day.

200 teachers at Concordia University have also signed a petition opposing the tuition hikes.

The Charest government promised in 2011 that university tuition, which has been increasing by $50 a semester since 2007, would be going up in Quebec.

Currently the lowest in Canada, under the budget legislation being introduced on Tuesday, tuition will rise by $325 per year for the next five years.

By 2017 tuition fees in Quebec will total less than $4000, bringing them closer to the current national average, but will still be among the lowest in the country.