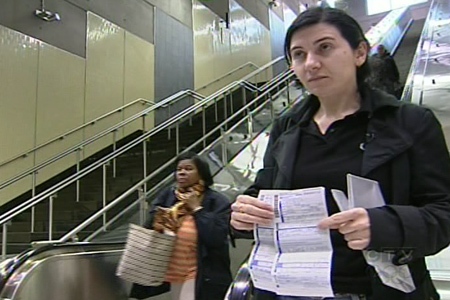 Bela Kosoian was fined $100 for not holding onto the handrail while riding an escaltor at the Montmorency metro station on Wednesday. Laval police gave issued her an additional $320 ticket for obstrution.

A woman is outraged after she was handcuffed and ticketed for not holding the handrail on an escalator at the Montmorency metro station.

Bela Kosoian, a 38-year-old UQAM international law student, said she was on her way to class Wednesday, when she was stopped by Laval police.

"I was looking for money to buy metro tickets," said Kosoian.

"When they told her to be careful, she turned around and she started screaming at them, telling them she wouldn't use the rail," said Lorrain.

Lorrain added Kosoian was repeatedly warned that she would be given a ticket if she continued to resist holding onto the handrail.

"The police officers told me she probably had a bad day. She jumped in their faces right away," Lorrain said.

Kosoian countered it was never made clear that she was breaking any rules.

"They didn't tell me anything," she said.

When they reached the bottom of the escalator, she was taken into a detention room.

There are stickers posted on the escalators at metro stations indicating that commuters must hold the handrail.

An STM bylaw states: "It is forbidden for all persons to disobey a directive or a pictogram posted by the Societe."

But the STM said Kosoian is the first person to be ticketed for riding the escalator without holding the rail.

Kosoian said she intends to fight the fines.