When health emergencies collide: mother, toddler and baby brother get medical care under one roof

MONTREAL -- A Montreal couple and their two young children are recovering from a whirlwind of recent health challenges, and are crediting the MUHC for going to great lengths to provide them care under one roof to keep their family together.

Stefanie Cortina was 37 weeks pregnant when she found herself sitting in the emergency room at the Montreal Children’s Hospital on a Friday morning last September.

She was waiting for a doctor to see her two-year-old son Alessandro, who had taken a little tumble and hit his head several days earlier.

To add to the stress, Cortina had just packed a hospital bag for herself because she was scheduled to be induced the following week at Saint-Mary’s Hospital. Her doctor there was concerned about the baby’s growth.

She never could have imagined, that within the next six days, her son would have three surgeries performed by two different surgeons and she would give birth to her baby - not at Saint-Mary’s but at the Royal Victoria Hospital with an obstetrics team she was meeting for the first time.

“It's not what you prepped for, you planned for,” she said. “There were even just too many emotions to process.”

MORE THAN A CONCUSSION

The cascade of medical hurdles began to develop when Cortina and her husband sought help earlier in the week at other emergency rooms. They were told three times that Alessandro had a concussion.

On the surface that diagnosis made sense to them, but as they observed their little boy, it felt off base.

“It was kind of just his behaviour. He was tired, he was fatigued. He was irritable. He wasn't himself,” Cortina said.

That led them to try one more time to get some answers three days later at the Children’s where the emergency team ordered a CT scan.

It showed Alessandro was not bleeding but had “excessive fluid on the surface of his brain and cerebellum,” according to Dr. Jean-Pierre Farmer, surgeon-in-chief and neurosurgeon at the Children’s, who was called in to consult.

“In retrospect, he probably had fallen six months ago, and he may have created a little tear in one of the membranes that cover the brain,” said Farmer, with a second fall likely causing the accumulation of fluid.”

The toddler was anesthetized for an MRI and, since he was still asleep from the scan, the neurosurgeon proceeded to immediately drain the fluid to release pressure, leaving a drain in place.

With about a week of recovery in hospital ahead for Alessandro, and with the date for Cortina’s scheduled delivery only a few days away, Farmer proposed a way for her and her husband to remain by her boy’s side as much as possible.

“We said it may be better if we organize the transfer to obstetrics here, and that you deliver here,” he said, because if not, “the family is going to be stretched between two hospitals.”

Cortina didn’t have much time to think about it. An action plan had to be put in place.

There was a sense of relief knowing they’d be in the same building at the Glen site if she could be transferred to the Royal Victoria Hospital (RVH) to have her baby.

Looking back now, “it was it was absolutely the right decision,” Cortina said.

“We were very happy to be able to accommodate the family,” Farmer said, adding that the way everyone at the MUHC made it happen despite numerous difficulties says a lot about the way care at the institution is organized.

“I think the reason to tell this story,” Farmer said, is not because of its medical uniqueness but rather “it's about the art of medicine, the ability to help the child and help the family when the situation gets a bit more complex.”

TWO OPERATIONS AND A BIRTH

With his wife now accepted as a patient at the RVH, Salvatore Lee-Giulione was breathing easier knowing he would not need to leave either member of the family alone in their hospital rooms for too long.

His speed-walking skills were soon put to the test when the plan for an induction became moot after Cortina’s contractions began naturally while she was sitting by Alessandro's bed at the Children’s.

The couple made the short walk through the hospital building to the RVH together, where nurses examined her and confirmed she was in active labour.

“So I stayed there. He went to prep my son, to get him up to an MRI while I was contracting. My husband came back just in time for me to get the epidural,” Cortina said.

“The care was absolutely amazing. We never had to re-explain our story” Lee-Giulione said, as they bounced back and forth between the children and adult hospitals.

Their second son, Adriano, was born healthy and quickly. His birth brought much joy to the couple, but not the total peace they desired.

“As soon as my wife gave birth, we found out that Alessandro needed another surgery,” Lee-Giulione said - the installation of a shunt to prevent fluid from accumulating in the brain.

“I was trying to do my best for my wife and Alessandro so I kept going back and forth reassuring my wife that he’s okay and everything’s going to be fine,” he said.

The couple then informed Farmer that Alessandro was also on a waiting list for a hernia repair, adding yet another layer of complexity to the medical picture. Farmer proposed another solution.

“We thought that not only would it be convenient if Alessandro could have his shunt inserted and the hernia repaired at the same time,” Farmer said, it also made good medical sense.

But that put Dr. Sherif Emil, Alessandro’s general surgeon in a quandary, since he was home recuperating on the couch after suffering a bad knee injury the week before.

“I had already seen Alessandro, I didn't really feel like I wanted the parents to meet another surgeon for the first time,” Emil said.

It was tough though to find a time the following day when both surgeons didn’t have other appointments or operations scheduled.

“It was all super short notice. So that really was a challenge. But you know, we still worked with all the pieces that we had, and were able to bring it together,” Emil said.

“I could just imagine how it is to have a child who is acutely ill when you've just had another child, so my heart really ached for the parents honestly."

So less than 24 hours later Emil arrived at the Children’s on crutches and he and Farmer tag-teamed their way through two different surgeries, saving Alessandro a return trip to the OR and another anesthetic.

‘BOTH OF MY BOYS, HAPPY, HEALTHY’ 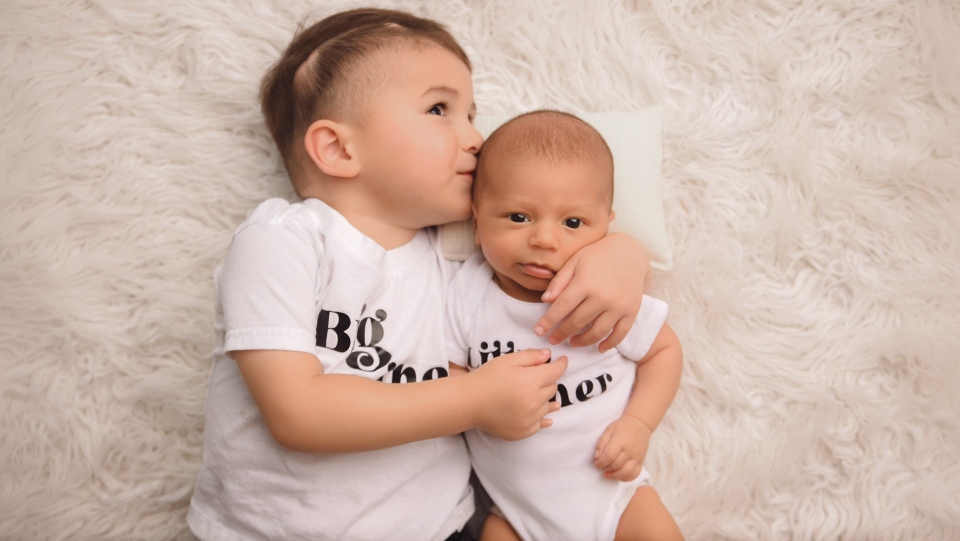 Alessandro and Adriano are happy and healthy after spending some time together at the hospital both with unique medical conditions requiring care. SOURCE: Natasha D Photographie

Only one week after Alessandro was admitted, and with at least four medical missions accomplished, the family was discharged - but not without one last important meeting.

They had to introduce Alessandro to Adriano.

“We just went in quick for a quick pick-up [with the baby]. And again, so many emotions were running through my mind. It was just amazing. I couldn't be more grateful in a moment to see both my boys happy healthy.”

“Alesandro, the smile he had on his face when he realized we were all going home and he saw his baby brother...I guess, it was good for him because he figured, oh, we were all here together,” she said.