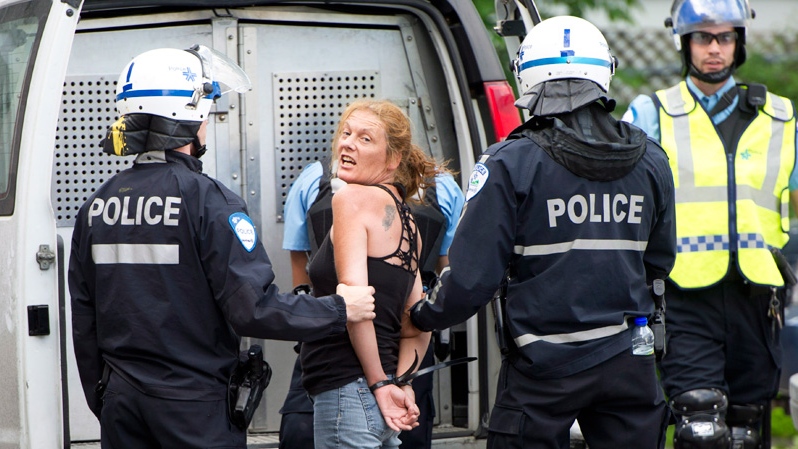 Police arrest a demonstrator trying to disrupt the opening gala at the Canadian Grand Prix in Montreal on Thursday, June 7, 2012. (Paul Chiasson / THE CANADIAN PRESS)

"It's good that they condemned it," said student Gabriel Barrea as he took a break from blowing on a loud horn in the nightly demonstration against the law and proposed tuition fee increases.

"It's an affirmation of democracy," he added, pointing out that the student demonstrations are regularly declared illegal. "During the F1, it was disgusting. They were making arrests and denying us access to the streets."

Police and demonstrators clashed regularly earlier this month when Montreal hosted the annual Formula One Grand Prix, which had several days of parties and events before the actual race weekend. Dozens of arrests were made as demonstrators protested near the venues.

Montreal has seen 57 nightly protests on top of other marches during the student dispute, which began in February. The nightly marches have been declared illegal before they started for the last few weeks but police have cited a municipal bylaw as their reason for doing it.

Julia Dube, a student at McGill University, had not heard about the condemnation of Bill 78 but also supported it.

"I hope the government will take this into consideration," she said as she walked along with a few hundred other protesters Monday night. "It's not surprising this has come up with the United Nations. If this is the case, it just adds to the other scandals of this government."

"If they want to win the next election, they should start listening to what people are saying."

The comments on the Quebec law by United Nations High Commissioner for Human Rights Navi Pillay were contained in a single paragraph of a long speech in Geneva during which she also lamented rights violations in places such as North Korea, Zimbabwe and South Sudan.

"Moves to restrict freedom of assembly in many parts of the world are alarming," she said.

"In the context of student protests, I am disappointed by the new legislation passed in Quebec that restricts their rights to freedom of association and of peaceful assembly."

The Quebec law sets rules for gatherings of more than 50 people and requires organizers to provide eight hours' notice of the itinerary and length of the event.

Charest called it rich that the criticism came from an agency based in Geneva, a city with its own much tougher protest laws.

"It's ironic ... that they're criticizing a law that requires eight hours' notice before a protest and an itinerary, when in Geneva -- where the United Nations office is -- it's 30 days' notice that they require," Charest told reporters at the global environmental conference in Rio de Janeiro.

"So we're not as severe as the place that hosts the United Nations. We're more supple, and more permissive."

"Quebec is a very democratic place, subject to the rule of law," Baird said. "People can challenge the government's decisions in court so I stand behind the government of Quebec.

The NDP's foreign affairs critic Paul Dewar said Monday the latest clash between the Tories and the UN was part of a "dangerous trajectory" that dates back to Canada's historic failure to win a temporary two-year term on the powerful security council two years ago.

"We're losing our credibility. We need to earn back our seat at the security council. This is not how you do that," said Dewar.

But a Geneva-based non-government organization leapt to Canada's defence, saying Pillay made a "big mistake" targeting Canada while ignoring the repression of Tibetan Buddhist monks by China, for instance.

"When a prosecutor goes after jaywalkers while allowing rapists and murderers to roam free, that's not only illogical, but immoral. She just needs to keep things in proportion," said UN Watch director Hillel Neuer, a Montreal-born lawyer.

-- With files from Mike Blanchfield in Ottawa