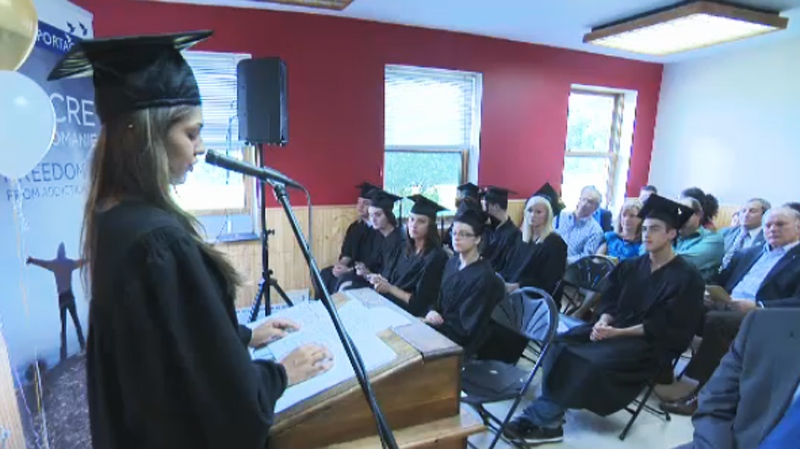 The facility sends off a group of teens who have fought the battle of their lives against drugs.

Ten students pocketed their Portage Academy high school graduation diplomas in a ceremony attended by 140 people at the Beaconsfield facility, a learning institution affiliated with the Lester B. Pearson School Board.

This year’s valedictorian, Luna del Buey, realizes the magnitude of the struggle she shares with those who have gone through the facility.

"Luckily for us, those dark times brought us here. It’s the light at the end of the tunnel," she said from the podium.

The 17-year-old del Buey has battled substance abuse since she was 13. She says joining the West Island Portage program eight months ago has helped her stay sober.

“When I was on drugs I didn't have any aspiration to do anything. I like to read. I like to write now, I play guitar,” said del Buay.

School is mandatory at the facility, as the teens put in the hard work to reclaim the pieces of their young lives.

“I never thought that I would ever finish high school. I was a drug user four-and-a-half months ago,” said Matthew Pascarella, 17.

Pascarella was addicted to speed and crack cocaine.

His drug use caused him to struggle at school and he even became aggressive to family members.

“I was afraid. It's like you don't know if he going to be aggressive towards me and to the household," said Pascarella’s mother Grace Marcarella. "The bad language wasn't correct. But seeing him today, the way he comes home with respect and manners, I'm proud of him.”

Portage Program Director Allan Farkas says stories like Pascarella's are all-too-common and stem from a variety of scenarios.

“There's been a real breakdown at home or youth protection involved, the child is not going to school this is one of the big things,” said Portage West Island Director Allan Farkas.

Sixteen-year-old Michelle Rucci says the program helped her cope with the emotional difficulties that led to her addiction.

There's always someone with you in the program who know what you are going through step-by-step,” said Michelle Rucci, 16.

Portage students sign on for two years and live at the school for six months, after which they continue to meet with groups to help them stay focused and look forward.

The next step for the grads that moved on Tuesday is on to mainstream school, where they all expressed the intention of pursing professional careers.