Port of Montreal strike: partial agreement made to move some of the 477 shipping containers 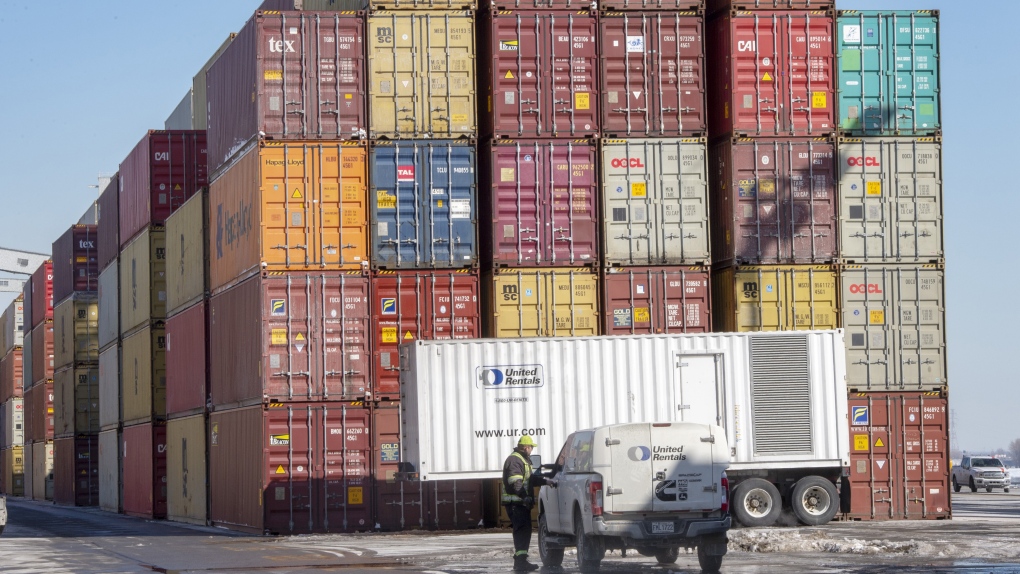 Containers are stacked at the Port of Montreal Friday, March 1, 2019 in Montreal. Canada closed out 2018 with its weakest quarterly economic performance in two and a half years - and experts say signs of the growth slowdown is likely to spread into the early months of 2019 and possibly beyond. (THE CANADIAN PRESS / Ryan Remiorz)

MONTREAL -- Management and union parties reached a partial agreement Thursday as to the fate of some of the 477 shipping containers sitting in the Port of Montreal amid a longshore workers' strike.

Tensions rose a notch on Wednesday after the Maritime Employers' Association declared that it wanted to remove the 477 containers from the port and was ready to bring in “replacement workers” to deal with the backlog if it couldn't come to an agreement with the striking longshoremen's union.

The union then appealed to unions of other organizations to demonstrate with it in front of a port facility on Thursday morning – but by Wednesday evening, the climate had calmed and the union cancelled the call for mobilization.

The parties were still in negotiations Thursday morning and by early Thursday afternoon, they announced a partial agreement.

The general and indefinite strike of the 1,125 Port of Montreal longshore workers, members of the Canadian Union of Public Employees (CUPE) affiliated with the FTQ, began on Aug. 10.

Under the agreement that was reached, "anything dangerous or related to COVID-19 will be taken out quickly by longshoremen," the CUPE said.

As for the other containers among the 477, they will be "studied one at a time, in order to judge their urgency,'' said the union.

The MEA said a partial agreement was confirmed "to move containers of controlled products, merchandise related to COVID-19 and unload a sugar shipment."

The group added that "containers of refrigerated products are still the subject of discussions and a joint decision will be made shortly" on the subject.

It is important to note that a quasi-judicial tribunal, the Canada Industrial Relations Board, has already ruled that essential services to be maintained during the strike. The MEA asked the board to declare that all longshore workers' be considered essential services, but the CIRB decided otherwise after holding several days of hearings spread over several months in 2019.

The longshore workers' first strike vote related to this conflict dates back to December 2018. They were awaiting that decision from the CIRB before exercising their right to strike,

The main point in dispute relates to working hours, according to the union.

Employers' associations and even ministers from the governments of Quebec and Ontario have asked the federal government - to which the Port of Montreal reports - to intervene so that the conflict can be resolved as quickly as possible due to its economic repercussions.

Federal Labour Minister Filomena Tassi however, reiterated her confidence in the ongoing negotiation process, adding that the ministry's mediation services are available as needed.

Any intervention by the federal government in a labour dispute has become more delicate following a Supreme Court of Canada decision rendered in 2015 which ruled that the right to strike has constitutional protection.